Chen Lei Reveals His Motivation For Success In ONE Championship 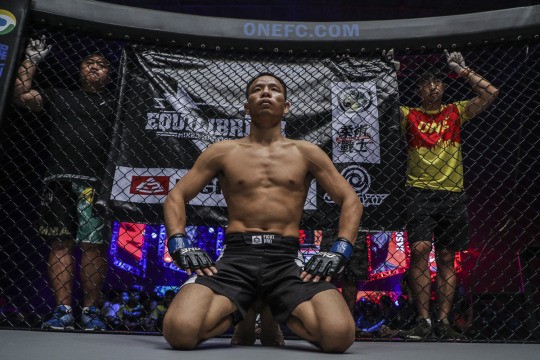 The Chinese bantamweight contender has surged up the divisional ladder and overcome a series of tough examinations inside the ONE Championship cage to date.

But the charismatic Chen has risen to the challenge each and every time as he has extended his undefeated professional record.

So far, he has four consecutive victories to his name in ONE Championship, and Chen says his successes can be put down to one thing – bravery.

“I think some people are born to be braver than others,” the 29-year-old says.

“Not everyone can be standing in the cage. We have paid such a high price to get here. We are warriors.”

A glance at his past bouts suggests he certainly has no fear of defeat, or his opponents’ skills.

Whatever the test, “Rock Man” has come through victorious.

One of the secrets behind his success is his mental toughness, forged during his formative years when he overcame bullying that he never discussed with his family or friends.

“I have had to deal with many things all by myself,” he explains.

Chen also had to show fresh determination when he embarked on his mixed martial arts career.

Without the backing of his parents, he started his journey alone, but did so with the typical gusto fans are used to seeing from him in the cage today.

“I am simply eager to win, and eager to change my own life.

“With anything in life, if I want to make it, I will put in 100 percent effort and energy to make sure it will happen. This is just who I am.

“I want to give my future wife a better life, and winning fights is the future for us.”

Chen’s determination and single-minded focus on not only building a legacy inside the cage, but also building a future outside of it, has driven him to the cusp of contender status in the ONE bantamweight division.

His next test, against Muhammad “Jungle Cat” Aiman, takes place at ONE: BEYOND THE HORIZON on Saturday 8 September in Shanghai, China.

It is the latest in a line of stern tests of his resolve, his character and his determination. But if his past form is any guide, “Rock Man” will meet the challenge head-on and give every ounce of energy he has in pursuit of victory.