Children in Hanoi practise Korean songs ahead of Trump-Kim summit

Children at the Vietnam-North Korea Friendship kindergarten, founded by the North Korean government in Hanoi.

Wearing traditional dress, the children in Hanoi's only North Korean-founded kindergarten belt out Korean songs and recite their Korean vocabulary - skills they hope to show off to Kim Jong-un when he visits Vietnam next week.

The North Korean leader is due to make his first trip to Vietnam for a second summit with US President Donald Trump on February 27 and 28, during which Washington hopes to see progress on dismantling Pyongyang's nuclear programme.

But the serious summit agenda was far from the minds of toddlers at the Vietnam-DPRK Friendship Kindergarten on Tuesday.

Instead the three-to-five-year-olds sang and danced in the 'Kim Il-sung' classroom named after Kim Jong-un's grandfather, one of Hanoi's closest allies during the Vietnam war.

"Jal gaseyo [goodbye]!" the kids chanted in Korean at the school where portraits of communist leaders past - Kim Il-sung, his son Kim Jong-il and Vietnam's revolutionary leader Ho Chi Minh - hang on the wall.

Established in 1978 at a time when conflict-battered Hanoi still received aid from Pyongyang, the school was built almost entirely with North Korean donations, from the blankets and mattresses for naptime to the bowls and utensils used at mealtime.

Today some of the school's 450 pupils learn about North Korean culture, from kimchi and kimbap to traditional dress, and occasionally receive visits from North Korean officials and embassy personnel.

"Even though North Korean friends are in difficult conditions, they still pay due attention to this kindergarten," former head teacher Hoang Thi Thanh told Agence France-Presse. 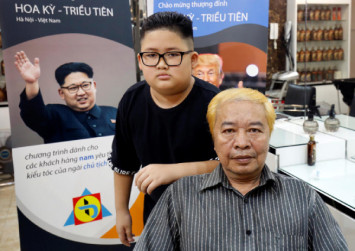 "We really hope to welcome North Korean leader Kim Jong-un to visit Vietnam and the Vietnam-DPRK friendship kindergarten, we have proposed our wish (to the embassy)," she told Agence France-Presse.

Pyongyang has not yet confirmed the summit, with news about its date and location coming only from the White House, and details of the North Korean leader's trip remain unknown.

The meeting is aimed at building on Trump and Kim's first summit in Singapore in June, the first-ever meeting between sitting leaders from the US and North Korea, who have never formally ended the 1950-53 Korean war.

Former head teacher Thanh said she would love to see Kim visit the school, but is also hoping for a productive summit.

"I hope for peace and stability in Korean peninsula in the next meeting. I also hope this meeting will bring closer the two sides of Korea like (north and south) Vietnam," she said.