Day or night, they are rarely short of customers, but the much-loved stores are now at the centre of a row over whether they should stay open 24 hours a day, every day of the year - a debate that strikes at the heart of crippling labour shortages in ageing Japan.

It may be 1am but Tokyo's omnipresent convenience stores, known as "konbini", are busy with customers dropping in for everything from milk to underwear.

Popping in for a cheeky late alcopop at a busy konbini near Tokyo's Ueno Station, Mai Tsumuraya says: "I finish work late... The supermarket closes early so I come to a convenience store. It's very convenient."

Day or night, they are rarely short of customers, but the much-loved stores are now at the centre of a row over whether they should stay open 24 hours a day, every day of the year - a debate that strikes at the heart of crippling labour shortages in ageing Japan.

Visitors to Tokyo are often amazed at the sheer volume of stores. There are 56,000 across Japan and in the capital, it is not uncommon to see different konbini at all four corners of a crossroads.

They provide a bewildering array of products, from toilet paper to bento boxes to hot chicken yakitori skewers. In addition, customers can do their photocopying, take out cash, pick up deliveries and even pay their bills.

They also play a social role, providing a well-lit and always-staffed sanctuary, as well as a gathering point during natural disasters.

The stores, run by franchisees, never, ever close.

The recent row started with a store in the city of Higashi-Osaka, in the west of the country.

Franchise owner Mitoshi Matsumoto made national headlines when he starting closing his Seven-Eleven store between 1am and 6am, bringing him into conflict with company HQ.

The 57-year-old began shutting up shop in February when his wife, who helped him run the store, died.

But Seven-Eleven Japan insisted he continue the 24-hour service. 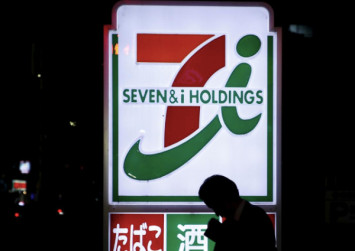 "The company thinks we should run 24 hours no matter what, even if we collapse from overwork," he tells AFP, adding he once worked for 38 hours straight due to a lack of staff.

"When you look at the costs and benefits, there's nothing good about this (24-hour) system," adds Mr Matsumoto, who says he went public after being threatened with a fine of 17 million yen (S$204,000).

The firm's president Kazuki Furuya stepped down earlier this month. No official reason was given for his departure but critics said he had failed to respond to the discontent among franchisees.

The government has got involved too, with industry minister Hiroshige Seko urging convenience store chains to come up with plans to tackle long hours and labour shortages in the sector, calling konbini part of "Japan's social infrastructure."

Seko's ministry have compiled a survey showing nearly two-thirds of franchisees (61 per cent) said they cannot find enough staff - up from 22 per cent in 2014.

Moreover, 40 per cent said they were unhappy with their situation, complaining of low profits and high royalties paid to the company head office. This was up from 17 per cent four years ago.

"The labour shortage has become more serious than ever in the past few years," Tomomi Nagai, chief analyst at Toray Corporate Business Research, explains.

"It's difficult to keep part-timers after midnight because wages aren't high but the job is complicated due to various services offered at the shops," she says.

"As a result, franchise-store owners are forced to work long hours and they're frustrated."

Chains including Seven Eleven are now beginning to trial shorter working hours in a handful of stores and are boosting the use of self-checkouts and automation - with one firm testing a human-free system from midnight to 5am in two shops.

But analysts say the 24-hour system is vital for efficient management of the stores.

"The supply chain will be less effective if more stores close at night, because deliveries will have to be made mostly in the morning when the road is congested," Mr Kuboto insists.

Even disgruntled franchisee Matsumoto says there needs to be a balance.

He explains: "I'm not saying all the stores should stop operating 24 hours. But we need a flexible system where we can do both 24 hours and shorter hours."

While the Japanese love the convenience offered by the konbini, a recent survey showed that eight out of 10 believe the 24/7 system needed reform.

Kota Shibai, a 22-year-old consultant insists it is "not normal" to operate 24 hours a day when there is insufficient manpower.

And Ms Tsumuraya, the late-night shopper in Ueno, says: "I'll manage somehow if no konbini is open. But I live my life on the premise that it is."