The bodies of three people were pulled from a pile of mud and rock after a landslide triggered by torrential rain inundated a village in the city of Bogor south of Jakarta, the disaster mitigation agency said.

Hundreds of rescuers, including members of the army, police and local community, are digging through the debris to find two others buried in that incident.

Near Jakarta's main airport, a 24-year-old woman was rescued after spending some 14 hours trapped inside a car buried under a landslide that stove in part of an underpass retaining wall.

She was pulled to safety around 7:00 am Tuesday but another woman in the same car later died in hospital from severe injuries, the transportation ministry said. 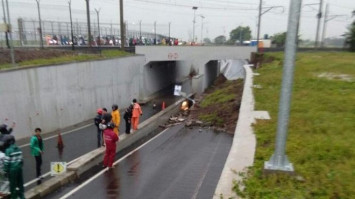 Greater Jakarta, which is home to more than 30 million people, has been pounded by heavy rain over the past 24 hours, triggering landslides and floods that have destroyed homes and toppled trees.

Residents could be seen sloshing through knee-deep brown water in some neighbourhoods.

City governor Anies Baswedan said more than 6,500 people have been evacuated in hard-hit areas of the metropolis, mainly in the eastern and southern parts of the city.

"Now our priority is to ensure evacuees that have been impacted by the floods receive aid," Baswedan said in a statement.

A floodgate was opened upstream in the Ciliwung river to reduce the volume of water gushing through Jakarta, he added.

Jakarta is hit by flooding annually during a months-long rainy season, with the city's numerous riverside communities worst affected.

In 2013 severe flooding submerged a major downtown roundabout, killing 20 and forcing 30,000 people from their homes.