The Cheollima Civil Defence group emerged from the shadows this week to claim responsibility for a commando-style raid on Pyongyang's embassy in Madrid.

Cheollima Civil Defence, also known as Free Joseon, acknowledged on its website late on Tuesday it was behind the Feb 22 incident but said it was not an attack and that the group had been invited into the embassy.

In a statement on the website on Thursday, Cheollima Civil Defence said that while it has "bigger tasks ahead," it had temporarily suspended work because of "speculative" media reports.

"We ask the media to restrain itself in its interest in our organisation and its members," the statement said, noting that the group's membership includes North Korean refugees, but that it had not recently contacted defectors living in South Korea.

A Spanish judicial source said on Wednesday that warrants were issued for the group's alleged leader and another suspect after a Spanish court investigation found that they had broken into the embassy, tried to persuade an official to defect and then stolen computer equipment.

The suspected leader has been identified by the court as Adrian Hong Chang, a Mexican citizen who is a US resident.

The other suspect sought in the arrest warrant is Sam Ryu, a US citizen of Korean descent. 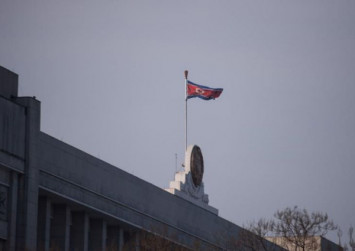 According to a Spanish court document made public on Tuesday, Hong Chang travelled to the United States a day after the raid and contacted the Federal Bureau of Investigation (FBI) to pass on information about it.

The FBI has declined to comment officially on any investigation, but an authoritative US government source said on Wednesday that it had received the names of the alleged embassy intruders from Spanish investigators and was looking into the matter at the request of Spanish authorities.

According to the Spanish newspaper El Pais, investigators have linked two of the attackers to the CIA.

The US State Department said earlier there was no US government involvement in the attack and a US government official said on Thursday that the CIA had had "no contact at all" with any of the individuals mentioned in the Spanish indictment.

"The Spanish authorities are still investigating this. All facts are not known," State Department spokesman Robert Palladino said at a regular briefing on Thursday, reiterating the US position that diplomatic missions "ought to be respected and are protected by treaty."

Asked whether the United States was assisting in the search for the suspects, he told reporters it was a "law enforcement matter" and that the State Department had no information to provide.

Spanish judicial sources told Reuters the two arrest warrants were likely to be the first of several as there were believed to have been 10 intruders.

The other suspects include South Korean citizens.

According to the Spanish court document, Hong Chang flew from Lisbon to New York after the raid and made contact with the FBI on Feb 27.

His current whereabouts are not known and efforts to contact him were not successful.

Lee Wolosky, an American attorney who represents Cheollima Civil Defence, said in a statement on Wednesday that the Spanish court "purported to reach conclusions without any input from representatives" of the group.

He said it was irresponsible "to disclose publicly the names of people who are working in opposition to a brutal regime that routinely and summarily executes its enemies."

The embassy raid occurred shortly before a Feb 27-28 summit between North Korean leader Kim Jong Un and US President Donald Trump in Hanoi.

According to the court document, during the raid, three of the intruders, who identified themselves as members of a group who campaigned for the "liberation of North Korea", took an embassy official into the basement and tried to convince him to defect.

The group kept embassy staff tied up for several hours and then searched the premises for arms before leaving, at which point they separated into four groups and headed to Portugal, the document said.

The document gave a detailed account of the intruders' movements before and during the intrusion, including their stay in a hotel and purchases of knives, balaclava masks and fake guns.