Duterte tells police, soldiers not to co-operate in any drug war probe

MANILA - Philippines President Rodrigo Duterte has ordered police and soldiers not to co-operate in any investigation into his bloody war on drugs, amid international calls for an external probe.

Western countries and rights groups have expressed alarm over the killing by police of more than 4,000 Filipinos since Duterte took office in June 2016, plus hundreds more killings of drug users by unknown gunmen.

"When it comes to human rights, or whoever rapporteur it is, my order to you: Do not answer. Do not bother," Duterte said in a speech before elite armed police units in his home city of Davao late Thursday.

"And who are you to interfere in the way I would run my country? You know very well that we are being swallowed by drugs," Duterte added.

The Philippines on Tuesday welcomed a United Nations investigation into Duterte's signature anti-narcotics campaign, but not if it is conducted by the current UN special rapporteur on extrajudicial killings, Agnes Callamard, who Manila has accused of bias and of not being qualified

Read Also
Duterte to policemen: Kill criminals if you have to, I'll protect you 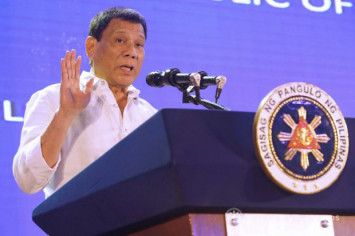 An International Criminal Court prosecutor has opened a preliminary examination into a complaint accusing Duterte and top officials of crimes against humanity in the anti-drugs campaign. Duterte says he welcomes that and is willing to "rot in jail" to protect Filipinos

Human rights advocates have said many of the police killings in the drugs war have been executions. Police deny the allegations, saying they had to use deadly force because the suspects were armed and had resisted arrest.

Despite criticism of the Philippine leader's bloody anti-narcotics campaign, Duterte remains wildly popular and is the country's most trusted public official, according to opinion polls.