Royal officials place a chicken and a cat next to the bed of Thailand's King Maha Vajiralongkorn during the ceremony of Assumption of the Royal Residence inside the Grand Palace in Bangkok, Thailand, May 4, 2019.

BANGKOK - Animal lovers in Thailand were thrown into confusion on Sunday over whether a Siamese cat presented to the newly crowned Thai king and his queen was a living feline - or not.

Thailand is holding three days of coronation events for King Maha Vajiralongkorn, 66, who was officially crowned on Saturday in elaborate ceremonies.

It is tradition at royal coronations to present a cat - as well as several symbolic household items - to a new monarch as part of the private Assumption of the Royal Residence blessing ceremony, which was held on Saturday at the Chakrabat Biman residence.

Cats are considered lucky by many Thais and the tradition of giving one as a housewarming gift signifies a stable home. 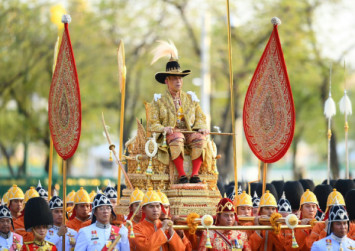 On Sunday morning, several Thai media outlets carried a photo of two uniformed palace officials next to what appeared to be a docile Siamese cat and a fluffy white rooster. The image, distributed by the Bureau of the Royal Household, was not captioned.

But by afternoon, the Thai-language news site Manager was reporting that the palace had used a "cat doll" instead of a live cat.

A palace official, contacted by Reuters, said: "The royal ceremony required the use of a rooster and a cat. It should not be the focus whether the animals were real or not, but instead the ritual itself is important."

Reuters was unable to independently confirm whether live animals were used in the ceremony or the photograph.

A Facebook page Maewthai.com - "ThaiCat.com" - posted a copy of the palace photo with a message from a well-known cat breeder saying he originally had been asked to select two gentle male Siamese cats for the ceremony but his cats were ultimately not used.

"I feel grateful for His Majesty's kindness for feeling compassionate about the cats, fearing that the animal would suffer from waiting too long during ceremonies, so the cats were not used," said the breeder, whose post did not identify him by name.

The breeder did not directly address whether the cat in the palace photo was a doll.

That ambiguity confused some Thais who posted comments online.

"So is it real or fake cat?" a Facebook user called Niphawan Rakpontee asked.

Another user named Krittaya Parichayanan said "It's a real cat isn't it?"

"This is likely a stuffed cat," user Prapaporn Tongprasan said.

Thailand has strict lese majeste laws carrying prison sentences of up to 15 years for insulting the king, queen or the heir-apparent.

Historical images of the 1926 coronation of King Rama VII, the current monarch's great uncle, show a group photo with female members of the royal family holding both a Siamese cat - a breed that originated in Thailand - as well as a rooster.

"The meaning of having a cat is that it brings warmth to the household. It is an old court tradition that has appeared in the royal chronicles," he told Reuters.

Asked if the cat in the palace photo was alive or a doll, Sujane said: "I have no idea."