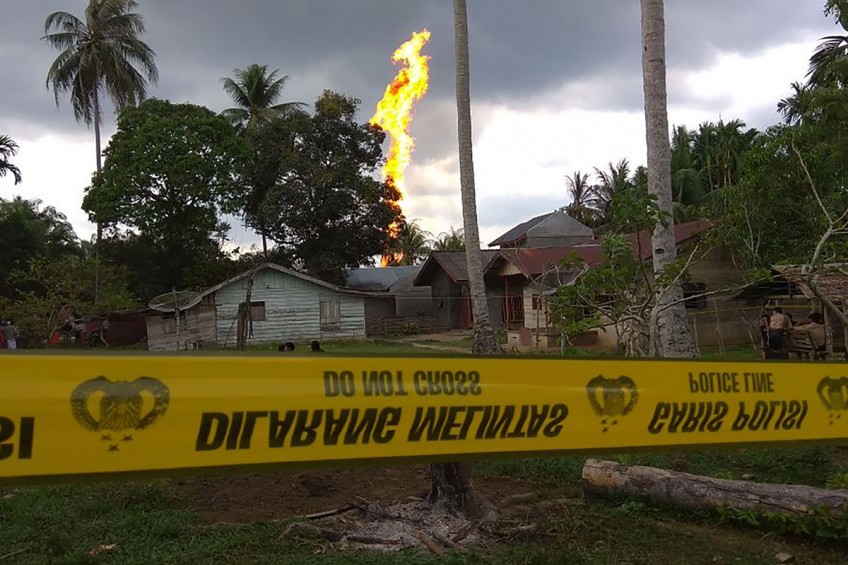 BANDA ACEH, Indonesia - Firefighters in Indonesia are struggling to contain a blaze at an oil well in the northwestern province of Aceh that killed ten people and injured as many as 40, authorities said on Wednesday.

Flames towered over houses and trees as firefighters hosed down the area while villagers watched, in pictures posted on social media by Sutopo Purwo Nugroho, the spokesman of Indonesia's disaster mitigation agency.

"We are still collecting data on the number of victims because the fire has not been extinguished yet," the agency said in a statement.

The fire broke out in the east Aceh district in the early hours of Wednesday, after a well of depth 250 meters (820 ft) overflowed and residents gathered to collect the oil, the agency added.

Dozens of people were being rushed to hospital in the provincial capital of Banda Aceh, it said, adding that state oil firm Pertamina was providing equipment to help control the fire.

"We suspect this is a well drilled by the community...and we suspect there was someone smoking in the area at the time," said police official Wahyu Kuncoro. The number of injured stood at 40, he added.

Such illegal drilling is common in Aceh, where Pertamina operates an oil field.