TAIPEI - Foxconn chairman Terry Gou said on Friday (June 21) that he will hand over the running of the world's largest electronics contract manufacturer to a new operations committee, as he prepares to contest Taiwan's presidential elections next year.

The 68-year-old Foxconn founder was speaking at the company's annual general meeting in Taipei, where a few hundred shareholders and supporters braved the heat to watch a live broadcast on big screens.

Mr Gou, who announced his presidential bid in April, told Reuters that he planned to step down from Foxconn to pave the way for younger talent to move up the ranks.

He is expected to retain a seat on the company's new board, but Foxconn said last week - at its first investor relations conference - that the development of his presidential bid would affect his future role on the board.

Taiwan's election follows a period of increasing tension between Beijing and Taipei, with Mr Gou seeking to represent the China-friendly opposition Kuomintang (KMT). 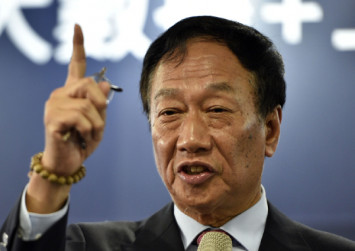 His election bid might be weighed down by his ties to a Chinese leadership that refuses to renounce the use of force to unify the mainland and Taiwan, which it considers a wayward province, analysts have said.

A new Foxconn chairman is expected to be elected at a board meeting later on Friday morning.

Mr Gou, who founded Foxconn 45 years ago, is Taiwan's richest person with a net worth of US$7.6 billion (S$10.3 billion), according to Forbes.

Mr Gou's departure also comes at an uncertain time for Foxconn, which has a big roster of US clients who have fallen foul of a long-running trade war between Beijing and Washington.

United States President Donald Trump has threatened to slap further tariffs on US$300 billion worth of goods from China, where the bulk of Apple's devices are assembled.

The country is also a key market for the firm. Investors are keen to know whether Foxconn will adjust its production line for Apple and others.

Nikkei Asian Review reported that Apple has asked its main suppliers to assess the cost implications of moving part of their production capacity from China to South-east Asia.

Foxconn said last week that it had enough capacity outside China to meet Apple's demand in the American market, if the need should arise for the iPhone maker to adjust its production lines due to the US-China trade war.