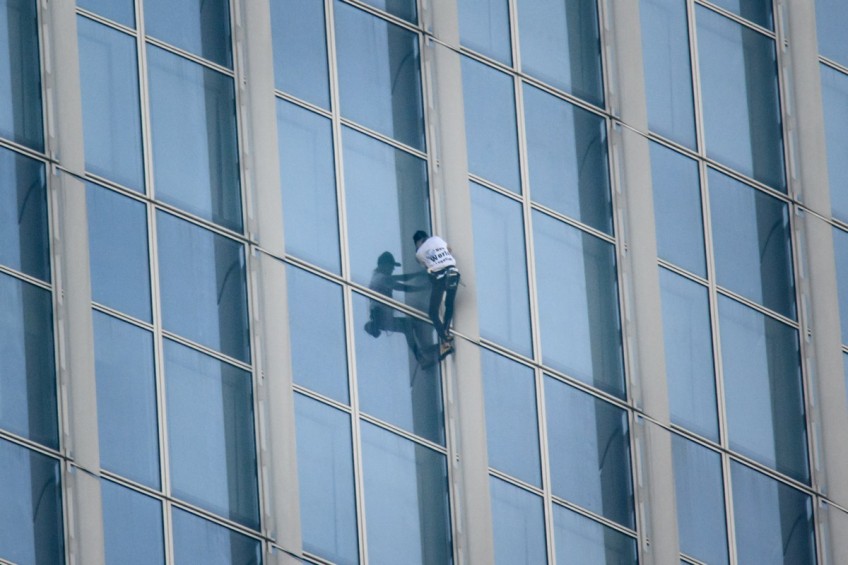 French urban freeclimber Alain Robert attempted to scale the world's fifth-tallest building Wednesday, getting more than halfway up the 123-storey Lotte World Tower in Seoul before security forced him to abandon the ascent.

The 55-year-old, dubbed the 'French Spiderman', made his way up the building bare-handed and without ropes as staff pursued him from inside.

"I climbed about 75 stories and then after that, it was a bit like cat and mouse," Robert told AFP. "Finally, I decided to surrender."

He was taken to the rooftop on a maintenance cradle and arrested.

As he awaited processing by police he told AFP his climb was to celebrate the recent peace-making efforts between the two Koreas and he hoped the authorities would take that into account.

"I may get a hefty fine ... but I did it because of what is happening now between South Korea and North Korea," Robert said.

"That is my way of saying thank you to Kim Jong Un and Moon Jae-in."

In the last two months, the leader of nuclear-armed North Korea has twice met the South's president, the two men exchanging smiles and hugs after years of heightened tensions.

Robert has scaled more than 100 structures without ropes or other safety equipment, setting a record for "most buildings climbed unassisted" according to Guinness World Records.

His successes include many of the world's tallest skyscrapers and iconic buildings, such as the Eiffel Tower, the Sydney Opera House, the Petronas Twin Towers in Kuala Lumpur and the Burj Khalifa in Dubai -- where he used suction devices and a safety rope as it has no hand or footholds.

Several fire trucks and police were sent to the Seoul building after a security guard spotted the French climber.

"It's regrettable," said You In-sik, a spokesman for the Lotte World Tower. "He climbed without permission. It's dangerous."

Robert has suffered several severe falls while climbing and estimates his accidents have left him 66 per cent disabled. He has been arrested numerous times for his exploits.