Cho Gi-Dong, who lost his 24-year-old daughter Ye-jin in the deadly Halloween crush in Seoul a month ago, cries as he visits a charnel house where her remains are kept in Daejeon, South Korea, Nov 29, 2022.

SEOUL — Taking time off work, South Korean bus driver Cho Gi-Dong has visited a crypt where the remains of his 24-year-old daughter are kept almost every day since she perished in a deadly crush on the night of Halloween a month ago.

Ye-jin was among 158 people who died in the disaster on narrow lane in Seoul on Oct 29. She was Cho's only child.

"My heart still throbs as if there's a rock in here, but I cannot take that out," Cho said, pointing to his chest as he stood in the vault of the crematorium in the central city of Daejeon.

"Children who lost their parents are orphans, but there's no word for parents who lost their children. I have found one — a sinner. I felt so guilty for losing her," he said, holding back his tears as he gripped a wallet he had gifted Ye-jin when she went to college five years ago.

Dressed as Princess Jasmine from the Disney animated film Aladdin, Ye-jin had gone for the night out in the capital Seoul with two friends. They also lost their lives.

The disaster unfolded as revellers flooded the alleyways of the nightlife district of Itaewon to celebrate the first Covid-19 curbs-free Halloween festivities in three years. 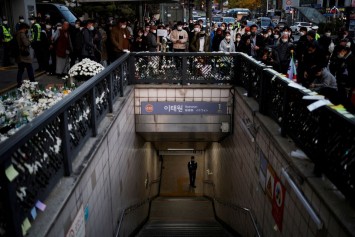 Most of the dead from that nightmarish night had been in their twenties and thirties. Many of the dead were suffocated in the crush. Nearly 200 others escaped with injuries.

Cho requested leave after Ye-jin's death, deprived of sleep and feeling helpless about having been unable to save her life.

His sorrow turned to anger especially after the release of transcripts of emergency calls showing that people had repeatedly warned of the dangers and urged intervention hours before the disaster struck.

Police faced stringent public criticism and scrutiny over its responses to those calls, and an investigation is underway into authorities' overall handling of the disaster.

Last week, some relatives of victims held a news conference demanding a government apology and a thorough investigation.

Cho said he has not received any offer of help from the government except for guidance on how he can be reimbursed for funeral costs and receive what is termed "consolation money".

"We don't need money, we live well enough without that money. That's not the way to console us bereaved families," Cho said.

"If we get a proper apology and see those responsible strictly punished, it would reduce my anger by a tenth, or one-ten thousandth, at least by a little bit."

Lee Ju-hee, from a collective of human rights lawyers called Minbyun, said nearly 60 families have joined a campaign for justice.

"Eventually some would seek damages suits," Lee said. "But what's important to us right now is the truth — why our children had to die on the street that we have walked past all the time believing it would be safe."