The air quality index of the US Embassy in New Delhi stood at "hazardous" levels of 497 as of 0630 GMT, with levels of airborne PM2.5 - particles that can reach deep into the lungs - touching nearly 700 in parts of the city.

That is more than 10 times the recommended safe limit of 60 for PM2.5.

The city government of Delhi, a metropolis of over 20 million, is restricting the use of private cars until Nov 15 with an "odd-even" system - allowing cars on alternate days, depending on whether their licence plate ends in an odd or even number.

The scheme, which includes a two-day waiver for a religious festival, has helped little, prompting environmentalists to call for urgent action. 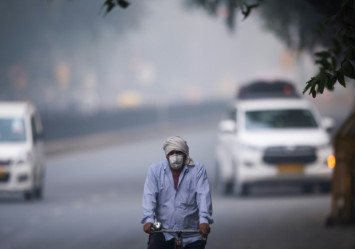 "If this was the plague, he would have declared an emergency."

Every year, as India's winter season approaches, farmers in Delhi's neighbouring Punjab and Haryana states, where agriculture is a mainstay, burn off rice field stubble in preparation for the sowing season.

India's Supreme Court last week chided the authorities for their failure to curb the pollution and asked the city government, its neighbouring states and the federal government to work together to help improve air quality.