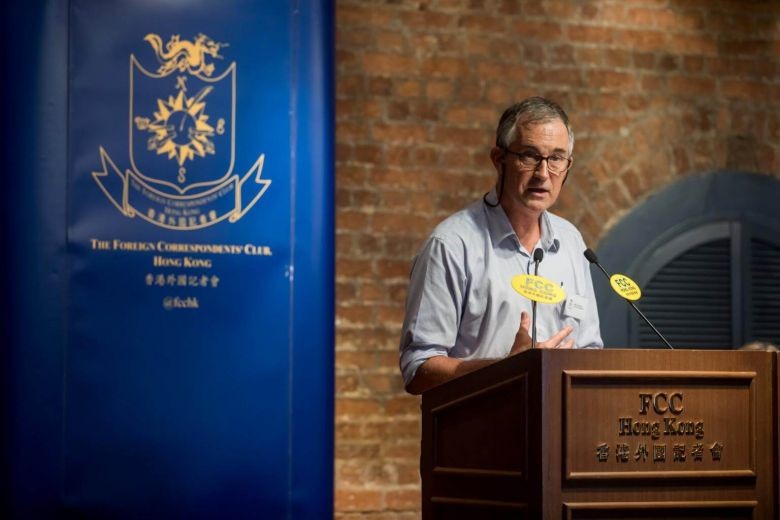 Earlier this month, Hong Kong refused to renew the work visa of Mr Victor Mallet, Asia news editor for the British-based Financial Times newspaper, after he hosted a speech by an independence activist.
Reuters

HONG KONG - As Hong Kong's government hews closer to Beijing, officials are taking a tough line on perceived national security threats, even deploying an elite police unit for political monitoring and surveillance - a sharp escalation in rhetoric and action.

In just the last few months, the special administrative region has banned the Hong Kong National Party, which espouses separation from China, and barred some activists from standing in local elections.

The Education Bureau sent all secondary schools in the Special Administrative Region letters on Sept 24 saying they must prohibit "the penetration" of the National Party or risk prosecution.

And this month, Hong Kong refused to renew the work visa of Mr Victor Mallet, Asia news editor for the British-based Financial Times newspaper, after he hosted a speech by an independence activist.

"We can see them (the government) being much more assertive in using these powers and in shaping their policy decisions to reflect the national interests," said Professor Simon Young of the University of Hong Kong's law school, saying the courts may be a last line of defence against government overreach.

Sources familiar with the wing's work say it led surveillance and monitoring operations against the National Party and more than a dozen other groups.

The Hong Kong Journalists Association recently described the prospect of tougher national security enforcement as "a sword dangled above the heads" of reporters.

The Financial Times said it was appealing the decision denying Mr Mallet a work visa. In his role as first vice-president of the Foreign Correspondents' Club of Hong Kong, Mr Mallet in August hosted Mr Andy Chan, head of the National Party.

The party was banned last month as an "imminent threat to national security" as the government invoked little-known clauses of a law regulating private groups and societies.

Authorities have so far refused to explain their decision on Mr Mallet, except to say that no independence advocacy will be tolerated.

Mr Chan, a bespectacled 28-year-old interior decorator, says that his ideology springs from China's broken promises towards Hong Kong and that claims he might destabilise China are preposterous.

But Hong Kong's government is treating even the consideration of independence as a vital threat.

"Worryingly, they have been parroting the ideological and authoritarian line of Beijing... irreparably undermining their reputation," one diplomat said of the city's government.

In the letter to schools last month, the Education Bureau said, "should students have erroneous and extreme thoughts, principals and teachers should correct them with facts."

Some teachers described this to Reuters as a "gagging order". That appears to run contrary to Hong Kong's mini-Constitution, known as the Basic Law, which stresses freedoms of speech and assembly.

Some youths who drove the pro-democracy "Umbrella Revolution" street demonstrations in 2014 say there is a growing sense of despair at the pressure on civil society and individual rights.

Mr Daniel Cheung, a 29-year-old photographer who worked on Chronicle of a Summer, a documentary on activists such as jailed independence leader Edward Leung, said the situation was worsening fast.

"Put simply, if you see Hong Kong as a house built by the British, this house is now crumbling and leaking. It has been hit by a typhoon and close to toppling over," Mr Cheung said.

'BACK TO THE FUTURE'

The Basic Law requires the city to create laws against treason, secession and subversion of the national government, effectively updating those from the colonial era.

The laws from British rule, while broad, do not outlaw calls for independence or self-determination.

Previous attempts to draft a harsher new national security law, known as Article 23, were met with mass protests and abandoned.

Chief Executive Carrie Lam, who took office last year, has not yet proposed a new version, a reflection in part of lingering public concern.

But many observers say the government is using the Security Wing to tighten its grip even without Article 23.

The wing's officers were deeply involved in producing the 700-page dossier the government used to justify banning the National Party. The document tracked its statements, public appearances and activities.

For some, that has echoes of the colonial-era Special Branch, which monitored potentially subversive Chinese and Russian communist activity across Hong Kong during the Cold War. The agency was disbanded in 1995, two years before Britain handed Hong Kong back to China.

"It is clear it (Security Wing) is doing much more political work now," said Mr James To, a veteran democracy advocate who has spent much of his 27 years in the city's Parliament scrutinising the government's security policies.

"My worry is that when you monitor people's political life and thoughts, you are going against the spirit of the human rights provisions of the Basic Law. There is a need for balance," Mr To said.

Mr To said the government had repeatedly refused requests by Hong Kong's legislators to discuss the Security Wing's operations in detail.

Headed by an assistant commissioner, the Wing has over 700 staff, according to government information provided to lawmakers in recent years, some of whom have close ties with mainland Chinese counterparts as well as foreign diplomats based in Hong Kong.

One former senior officer familiar with the branch's work said he was witnessing a sea change in the government's previously hands-off approach.

"It is back to the future," he said. "It is eerie to see them embark on the same kind of monitoring and control operations that we used to do with an entirely new generation."

Police declined to comment on whether other activists or groups, including those calling for greater autonomy in the longer term such as Mr Joshua Wong, were being targeted, saying the department wouldn't "disclose details of operations and investigations".

Some observers see an expanding clampdown as inevitable given the political climate.

"They (the police) are clear what China's thinking is on this issue," said a senior police source, who declined to be named given the sensitivity of the issue.