The result is another blow to the democratic movement as room for opposition in semi-autonomous Hong Kong shrinks under an assertive China.

Its representation in the legislature took a hit in 2016 when six elected lawmakers, including pro-independence activists and former protest leaders, were disqualified following an unprecedented intervention from Beijing.

After the count ended in the early hours of Monday, the democratic camp was left with 26 seats out of 70, meaning they will continue to be outgunned on most bills under the legislature's "split voting system" as they failed to regain the veto power they lost due to the disqualifications.

In earlier by-elections in March, the democracy camp only managed to take back two of the four contested seats. 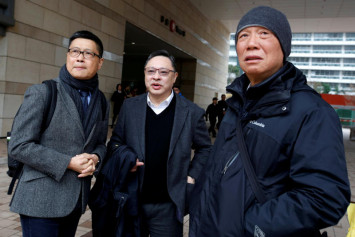 The Kowloon West seat contested Sunday had been vacated by pro-democracy activist Lau Siu-lai, one of the legislators ousted from parliament, who was barred last month from trying to win back her seat because of her support for self-determination for Hong Kong.

She was the latest candidate to be blocked from standing as Beijing says it will not tolerate any challenges to its territorial sovereignty.

Others who have advocated independence or self-determination have also been barred previously.

Veteran former pro-democracy lawmaker Lee Cheuk-yan was defeated by pro-establishment candidate Rebecca Chan, a former journalist who has drawn criticism for suggesting that she would not interview pro-independence activists as it would mean providing a platform for their beliefs - a view shared by Beijing.

Chan last month said the government's refusal to extend the work visa of senior Financial Times journalist Victor Mallet after he chaired a talk by an independence activist at the city's press club had nothing to do with press freedom, local media reported.

The authorities' effective blacklisting of Mallet, a British national who was also barred from entering the city as a tourist this month, was widely seen as an unprecedented attack on Hong Kong's press freedom.

Following his loss, Lee said: "we need to reflect on today's defeat, but we must stand up again and continue fighting for Hong Kong people and Hong Kong's future!" Hong Kong has rights unseen on the mainland, protected by an agreement made before the city was handed back to China by Britain in 1997, but there are fears they are being steadily eroded.

Earlier this year, young pro-democracy leader Agnes Chow was barred from standing in by-elections because her party advocates self-determination for Hong Kong.

The six lawmakers ousted from office were removed from their posts for inserting protests into their oaths.

The legislature is fundamentally weighted towards Beijing as only around half the 70 seats are elected.

The rest are selected by primarily pro-establishment interest groups.