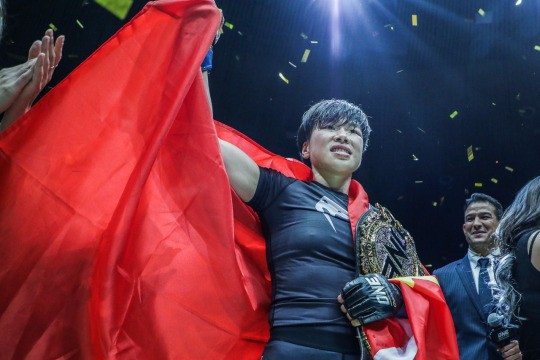 ONE Women’s Strawweight World Champion Xiong Jing Nan’s success in ONE Championship has come, in no small part, as a result of her heritage and her background.

“The Panda” is a proud Chinese citizen, and her country’s culture of hard work and dedication has proved essential to her journey as a mixed martial artist.

“I love China. I am just a very simple girl who is chasing my dream,” the 30-year-old says.

“Chinese people are good at learning, and are willing to try their best. I think this is what I learned from my country.”

Xiong started out her athletic career as a competitive weightlifter in Shandong province, then took up boxing in Beijing, where she excelled and became part of the Chinese national team.

Her desire to succeed and represent her nation started back in those days boxing for her country, and that desire burns even stronger today as Xiong, the ONE Women’s Strawweight Champion, leads the way as the first-ever mixed martial arts world champion from China.

“They are behind me, like they are my rock,” she says of her fellow countrymen and women.

“That gives me the strength to fight my battles.”

Xiong’s journey was focused on her becoming the ONE world champion. But now she has the World Title, her job has changed. She has to defend her belt, her honour, and her status as a Chinese World Champion.

It is a different kind of pressure, but it is one that she is relishing ahead of her upcoming title defence against Samara Santos at ONE: BEYOND THE HORIZON in Shanghai on 8 September.

“I would not say there is no pressure at all. But yes, in a positive way, my people always make me do a better job,” Xiong explains.

“Sometimes, it is not that difficult to reach the top, but remaining on top is the most difficult thing to do. The world is hearing my voice from China, but I cannot do this without my people’s support.”

As well as retaining her title, Xiong is determined to inspire others from her country to chase their dreams and succeed, just as she has.

“You cannot inspire people if you do not get inspired by them first,” she offers.

“I wish to make more people in this world see the power, the skills, and the faces of Chinese people in mixed martial arts.”

“Martial arts is getting more and more popular in China. What I do is show people what they can do as well.”

Xiong will compete on home soil when she defends her title on 8 September, and victory will only serve to strengthen her reputation as Chinese martial arts’ leading light.