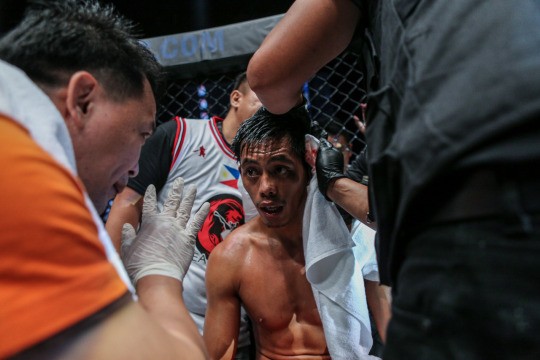 After a turbulent period in his career, Honorio Banario is back on form and surging towards a ONE Championship World Title again.

The Filipino star and Team Lakay veteran captured the ONE Featherweight World Title earlier in his career, but after losing the belt in his first defence, “The Rock” suffered the worst form of his career.

Now he is reinvented as a lightweight and riding a five-bout win streak, Banario is heading back towards title contention once again.

Banario’s renaissance is down to countless hours of hard work in the gym, but the former World Champion also says he owes a debt of gratitude to his teammate and main training partner at Team Lakay, former ONE Lightweight World Champion Eduard Folayang.

“I am extremely honoured to have Eduard as a mentor, and as a brother,” Banario says.

“I owe a huge part of my success to him.”

Banario’s relationship with Folayang helped him through the toughest time in his career when, after losing his belt, he fell to a five-bout losing streak.

“The Rock” was at his lowest ebb, and considered hanging up his gloves for good, but Folayang was there to help pick him up and give him the confidence he needed to embark on a comeback.

“When I was at the lowest point in my career, he was one of the strongest voices that told me to keep going. He motivated me and gave me hope. He is like my older brother,” Banario explains.

“He is wiser and more experienced. I have learned a lot from him. In training, we push each other to the limit, and it has been great for my development as a martial artist.”

Banario made the decision to move up to lightweight – the same division Folayang ruled as ONE World Champion until last year – and the change has proved to be a good decision, with the pair pushing each other hard in training.

“Whenever we spar, we really test each other’s limits. I think it is really a good thing that we are able to have each other to push ourselves,” Banario explains.

“Eduard has faced the best lightweights in ONE, and he is at the top of the stack. He was the World Champion – he still is, in my eyes. To be able to train with someone like that, it only makes me a better fighter.”

Now Banario has the chance to elevate his stock as a lightweight to new heights. “The Rock” is scheduled to take on Singaporean star Amir Khan at ONE: BEYOND THE HORIZON on 8 September in Shanghai, China.

The Filipino has been leaning heavily on his former world champion teammate as they’ve trained extensively at their Baguio City base ahead of the contest.

“Eduard’s style is very difficult to deal with,” Banario says.

“He has amazing cardio, and he will keep the pressure on you and never stop. It is exhausting to spar with him, but perhaps his greatest strength is his unwavering will to win.

“Eduard has no quit in him – no matter who he is up against, or how far behind he is in a fight. He will never give up and will continue to push forward.

“I admire his iron will. He is very mentally strong, and that is one of the things I am trying to pick up from him.”

While Banario is undoubtedly learning and developing as a result of his relationship with Folayang, “Landslide” is also developing his own game, too.

“I think I learn more from him than he does from me,” Banario laughs.

“But I am grateful that I can also teach him, and help him with his career.

“He is a pioneer in the Philippine martial arts scene. He has so much knowledge and experience. I learn so much just by training with him.”