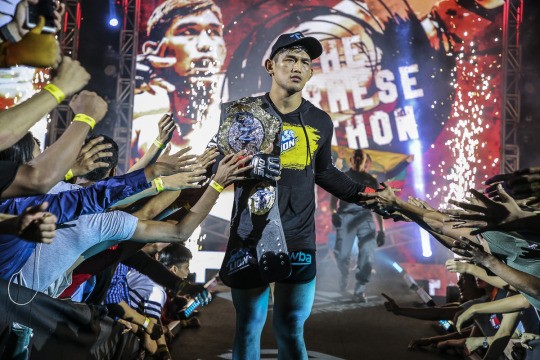 Two-division ONE Championship World Champion Aung La N Sang is riding the crest of a wave as arguably the biggest martial arts star in Asia.

The modest 33-year-old known as “The Burmese Python” accredits much of his excellent recent form to his change of gym.

Aung La N Sang made big changes to his career in early 2018, moving his training to Florida-based gym Hard Knocks 365, where his game has improved under the tutelage of head coach Henri Hooft.

The former world and European champion kickboxer has a reputation as one of the best head coaches in mixed martial arts, and the Dutchman has taken Aung La N Sang’s game to a new level.

Since he started training with Hooft, the Myanmar athlete has claimed knockouts in each of his last two World Title bouts.

Now Aung La N Sang is looking to complete a hat-trick of knockouts when he takes on Mohammad “O Lutador” Karaki at ONE: PURSUIT OF GREATNESS in Yangon, Myanmar on Friday, 26 October.

“I came down to Florida and did a private session with Henri Hooft, and he made a really good connection as a coach. Then I got a chance to work with the team at Hard Knocks, and I liked how they worked,” he explains.

He had travelled to Florida to visit another highly-regarded gym – American Top Team – but after discovering Hooft’s setup, he knew that was the right place for him.

“The coaches believe in you. They teach fundamentally sound techniques,” he explains.

“They don’t try to teach you too much fancy stuff. They teach you simple stuff that works very effectively.

“My wrestling is my weakness, and they have wrestling legends like Greg Jones and Kenny Monday – very, very high-level wrestlers.

“Working with them on my wrestling just makes me better, and then working with Henri Hooft’s system of kickboxing and striking is very simple, but very effective, and it works well with me.”

His commitment to his new gym was solidified when he took the decision to uproot his family from their Baltimore home and move down to Florida to make their permanent residence.

“When you’re in training camp, sometimes when your family is not there, you don’t sleep as well. When your wife and 3-year-old son aren’t there, you miss them,” he explains.

“I brought them here, and we’re here living so I can train here full-time and be here year-round.

The new setup certainly seems to be working for “The Burmese Python”, who is excited to show the world how much he has improved when he faces Karaki in his latest defence of the ONE Middleweight World Title on 26 October.

“The group of guys there and I had a really instant connection. I knew with them I could get better,” he says.

“They’re high-level guys, they’re always willing to help, and they’re always there to push you. That’s only going to make me better. It’s a really pro mixed martial arts room. It’s taking that training to another level.”