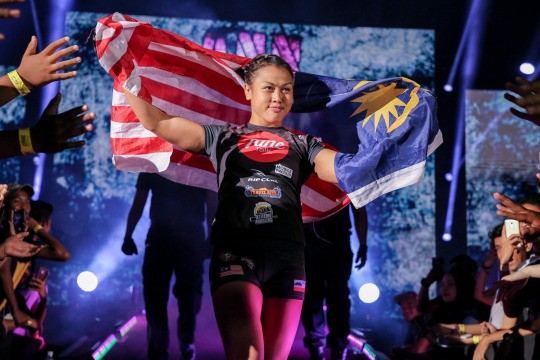 Martial arts isn’t a career, it’s a way of life, especially to those who step into the ONE Championship cage to compete.

The window to compete as a world-class martial artist is relatively small, but for the stars of ONE Championship, their journey isn’t necessarily over after they decide to hang up their gloves and retire from the cage.

That’s because ONE has started to invest in their retiring talent, and help take the organisation to a new level by hiring them as ONE executives.

In recent months, we have seen a host of former athletes hired in ambassadorial or administrative roles within ONE.

“There are so many world-class martial artists who continuously display their elite talent in ONE Championship, but there comes a point in every athlete’s career where they think about life beyond the cage, and their life after retiring from active competition,” explained Victor Cui, CEO International of ONE Championship.

“But their martial arts journeys do not have to end when they decide to retire from the cage. These are warriors who have incredible life experience and knowledge, which is something we really respect and value, being the Home of Martial Arts.

“That is why it is important, both as a company and a martial arts community, to continue fostering the talents of our athletes following their post-competition careers, and help to prolong and extend their martial arts legacies by offering a future beyond the cage. In these executive roles, they can help to ignite a new generation of heroes and fans, and continue to spread martial arts across the world.”

That ethos has been at the heart of the organisation for years, with the staff list at ONE already featuring a host of notable former competitors.

He has also worked to spread the word of ONE across Asia by hosting seminars, and is the face of the organisation’s first-ever original documentary program, “Rich Franklin’s ONE Warrior Series.”

Also in ONE’s executive ranks is Chinese martial arts pioneer Vaughn “Blud” Anderson. As ONE’s Manager of China Competition, he helps to scout and recruit talent throughout China and advise the country’s up-and-coming young stars to help them reach the global stage.

American legend Matt “The Wizard” Hume is the longest-serving former athlete on the ONE roster.

A lifelong martial artist who competed with great success in the early 1990s, Hume is the founder and owner of AMC Kickboxing And Pankration in Kirkland, Washington, where he is head coach to a host of world championship-calibre athletes.

Hume has been with ONE ever since the promotion began back in September 2011, serving as the organisation’s Chief Official and Head Referee, before settling into his current role as Vice President of Operations & Competition in August 2012.

Hume’s role with ONE is constantly evolving, and includes heading up the organisation’s matchmaking and talent acquisition, as well as managing standards in rules and regulations, and overseeing a dedicated staff that manages ONE’s many world-class live events, televised broadcasts, talents, and officials.

That roster of talent is now being bolstered by former athletes who have competed with distinction inside the ONE Championship cage.

“The former ONE athletes I have hired at ONE are bright, talented, charismatic, respected, and totally connected to the martial arts world. They are capable of helping the athletes, and grow the industry in greater ways than just offering a bout contract,” Hume states.

“This not only benefits the growth of ONE, but also inspires current and future athletes in ONE to know their loyalty and dedication can pay off in a future career beyond their competitive days. Many of the top martial artists are turning to ONE, due to the mutual respect and opportunity that ONE affords them.

“Being able to give back to these athletes and allow them to continue to utilize their talents in other capacities within ONE is a win/win and benefits everyone.”

One such athlete is Bashir Ahmad. Considered “the Godfather of Martial Arts in Pakistan,” Ahmad opened the country’s first gym, Synergy Fitness & MMA Club, in Lahore, and co-founded PAKMMA.

He joined ONE in 2012 and enjoyed a successful career inside the cage before eventually retiring from competitive action following his victory over Egypt’s Mahmoud Mohamed in October 2016.

The following year, Ahmad began a new chapter in his martial arts career when he accepted the position of Senior Manager of Industry Partnerships with ONE.

His role includes negotiating contracts, signing athletes, managing their transition into the organization, and ensuring each event runs safely and smoothly in accordance to the company’s standards.

It’s a role Ahmad compares to “getting a Master’s degree or a PHD,” but the former ONE athlete says investing in former athletes is vital to the continued success of the organisation as it continues its remarkable growth across Asia.

“It is natural that athletes will feel more comfortable with those who have been in their shoes. It is also important to hire people who are on the front lines of Asian martial arts. It is still not a very big community, and it is important to know who is who, and have some level of relationships with them,” Ahmed explained.

Ahmad was the first homegrown athlete to join the ONE executive team, but he certainly won’t be the last, with ONE Championship Chairman and CEO Chatri Sityodtong stating he intends to “hire many more ONE athletes after they retire. It is the circle of life. It is the warrior’s way.”

Sityodtong has since backed up his statement, hiring Malaysian women’s martial arts pioneer Ann “Athena” Osman last November, while it was also announced that undefeated ONE Welterweight World Champion Ben Askren would be assuming a role with the organization after his retirement.

With ONE actively looking to break new ground and continue their growth across the region, more opportunities for former ONE athletes are sure to materialise, as ONE seems to get the best out of its  martial arts talent, both inside and outside the cage.

“ONE Championship is committed to placing athletes in a working role whenever possible,” said Vice President Franklin.

“Our athletes know they have a possible post-competition career path, and our organization benefits from the athletes who know the market best in each region.”