'I bought everything because it's my last time': South Korean relatives head for family reunions in North 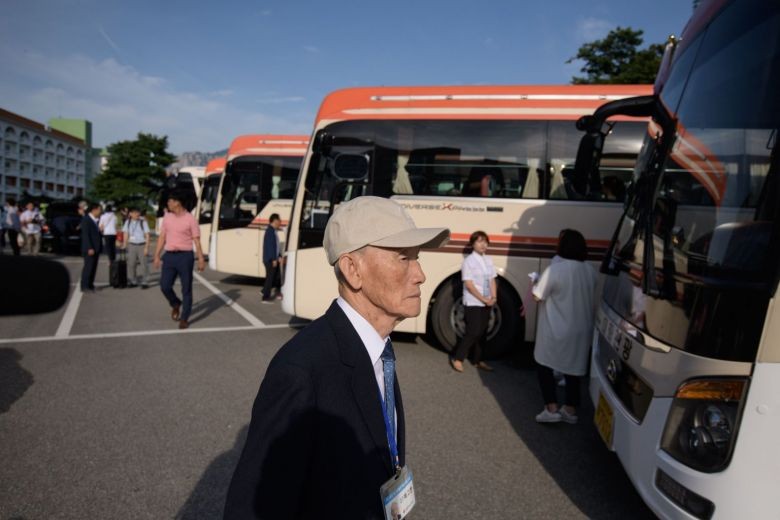 SOKCHO, SOUTH KOREA - Dozens of elderly and frail South Koreans set off for North Korea on Monday (April 20) to meet relatives for the first time since they were separated nearly seven decades ago by a war that divided the peninsula and their families.

The three-day reunion - the first for three years - will take place in Mount Kumgang resort in North Korea, following a rapid diplomatic thaw between the neighbours.

Millions of people were swept apart by the 1950-53 Korean War, which divided brothers and sisters, parents and children and husbands and wives, and finished with peninsula split by the impenetrable Demilitarised Zone.

The 89 elderly South Koreans, dressed in their best suits in the scorching sun, hobbled one by one to 14 coaches in Sokcho - wheelchairs alongside the vehicles - some excited while others were still in disbelief, before the convoy set off with a police escort.

Among them was Lee Keum-seom, now a tiny and frail 92, who was waiting to see her son for the first time since she left him behind in the turmoil of war.

She lost her husband and four-year-old son as their family fled, and boarded a ferry headed for the South with only her infant daughter - who was accompanying her to the reunion.

The son is now 71 and Lee has been told that he will bring his daughter-in-law to the meeting.

"I never imagined this day would come," she said.

"I didn't even know if he was alive or not."

Because the conflict ended with an armistice rather than a peace treaty, the two Koreas have remained technically at war.

All civilian exchanges - even family news - are banned.

Since 2000 the two nations have held 20 rounds of reunions but time is running out for many ageing family members.

More than 130,000 Southerners have signed up for a reunion since the events began but most of them have since died.

Most of those still waiting are over 80 and the oldest participant this year, Baik Sung-kyu, is 101. Baik, who will meet his daughter-in-law and granddaughter, said he had packed clothes, underwear, 30 pairs of shoes, toothbrush and toothpaste as gifts.

"I bought everything because it's my last time."

Six doctors and nearly a dozen nurses will travel to attend to the elderly group during the reunion and a makeshift emergency medical centre will be on duty around the clock.

Some of those selected for this year's reunions gave up after learning that their parents or siblings had died and that they could only meet more distant relatives whom they had never seen before.

But Jang Hae-won, 89, said he would meet his nephew and niece to reconnect with his parents who passed away in the North and offer his brother's children a glimpse of their father's life.

Jang and his older brother - who died 10 years ago - were the only ones from the family who fled their hometown in Hwanghae province to the South in 1951.

"They don't know what their father looks like so I will tell them what he looked like and when he died," Jang said.

"But that's it, because the more we talk, it will only be more sad." Over the next three days, the participants will spend only about 11 hours - mostly under the watchful eyes of North Korean agents - with their relatives in the North.

They will only have three hours in private - during a meeting held in the rooms of the South Korean participants - before the families are separated once again on Wednesday - in all likelihood for a final time.

Families at previous reunions have often found it a bitter-sweet experience.

Some complained about the short time they were allowed to spend together. Others lamented the ideological gap between them after decades spent apart.

Participants are chosen by lottery - after which checks are carried out to ensure their relatives are still alive - and are seen as extremely lucky.