Police said they were regrouping outside villages in the eastern state of Jharkhand after being repelled on Wednesday (June 27) by hundreds of locals, some armed with bows and arrows, while searching for the hostages.

The locals aligned to Pathalgadi - a popular indigenous tribal movement fighting for self rule in the region - were protesting arrests made over the rape of five charity workers last week. 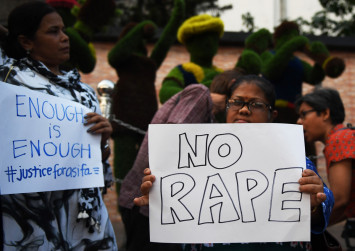 "We have called reinforcements to deal with the situation. We will soon recover the policemen and arrest the accused," Mr Sinha said.

The three officers were taken on Tuesday (June 26) during a violent protest at a local politician's house and taken to an unspecified location.

The region has been on edge since the charity workers were abducted and gang-raped at gunpoint while performing a play about human trafficking in the largely tribal district.

Pathalgadi was blamed for the assault. The assailants shot videos of the attack and threatened the women if they went to the police.

Two of the six accused have been arrested. Villagers helped the ringleader escape a police raid earlier this week, authorities say.

The Pathalgadi dismiss the authority of state and federal governments and do not allow outsiders to enter or settle in their area.

Stone monoliths placed at the entrance to nearly 200 villages in Jharkhand and tribal-dominated regions in neighbouring states indicate the group has a foothold there.

The Pathalgadi claim the government has given away natural resources like land and forests to corporations.

Authorities claim the movement is supported by Maoist who have been fighting against Indian government in numerous states for decades.

Those armed guerillas have been waging a low-level resistance in the so-called "red-corridor", a largely jungle stretch through east to southern and western India.