Activists of the Assam Pradesh Congress committee shout slogans during a rally in protest against Citizenship Amendment Bill 2016, which will provide citizenship or stay rights to minorities from Bangladesh, Pakistan and Afghanistan in India, in Guwahati on January 7, 2019.

NEW DELHI (AFP) - India's Lower House passed on Tuesday (Jan 8) legislation that will grant citizenship to members of certain religious minorities, but not Muslims, sparking protests in the country's north-east.

The Bill covers select groups - including Hindus, Christians and Sikhs - who moved from Bangladesh, Pakistan and Afghanistan and who have lived in India for at least six years.

Muslims are excluded, in what critics say is a transparent pitch by Hindu nationalist Prime Minister Narendra Modi to voters as India gears up for elections due by May.

The legislation, which still needs approval in the Upper House, sparked a second day of protests on Tuesday in the north-eastern state of Assam, where millions have settled in recent decades after fleeing neighbouring countries. 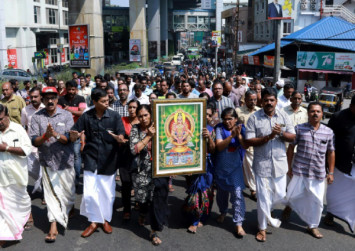 Demonstrators in the state are angry about the Bill not because it excludes Muslims, but because it grants citizenship to settlers from elsewhere, accusing the migrants of taking away jobs from indigenous groups.

The hilly state of 33 million people known for its tea plantations has been plagued for decades by tensions between tribal and ethnic indigenous groups and settlers from outside the region.

Last year, the Assam government published a draft citizens' register that left off four million people unable to prove they were living there before 1971, when millions fled Bangladesh's war of independence.

Nimai Hajong and his wife Sinibala Hajong sitting in front of their house in Bamunigaon village in Assam's Kamrup district, on Aug 8, 2018. The 58-year-old has been declared a foreigner despite living in the area for the past 5 decades.

A deadline to provide documents to be included in the registry passed on Dec 31, and the final list is due to be published on June 30.

Mr Samujjal Bhattacharyya from the NESO told AFP that people in the region would not "accept the political injustice perpetrated by the BJP".

"We have identified the stone pelters by seeing video footage and they will be booked soon," Assam police official Surjeet Singh Panesar said.

On Monday, a small party in the BJP-led coalition in Assam, the Asom Gana Parishad, walked out of the alliance in protest against the Bill, saying it would lead to an influx of Bangladeshi Hindus.