A health official draws a dose of the AstraZeneca's Covid-19 vaccine manufactured by the Serum Institute of India, at Infectious Diseases Hospital in Colombo, Sri Lanka, on Jan 29, 2021.

BHUBANESWAR, INDIA - A study of 614 fully vaccinated health workers in India found a"significant" drop in their Covid-19-fighting antibodies within four months of the first shot.

The findings could help the Indian government decide whether to provide booster doses as some Western countries have done.

Waning antibodies do not necessarily mean that immunised people lose their ability to counter the disease, as the body's memory cells may still kick in to offer substantial protection, said the director of a state-run institute that did the study.

"After six months, we should be able to tell you more clearly whether and when a booster would be needed," Dr Sanghamitra Pati of the Regional Medical Research Centre, based in the eastern city of Bhubaneswar, told Reuters on Tuesday (Sept 14).

"And we would urge similar studies in different areas for pan-India data."

British researchers said last month that protection offered by two doses of the Pfizer/BioNTech and the AstraZeneca vaccines begins to fade within six months. 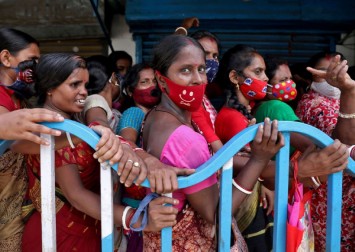 The Indian study, published in the Research Square pre-print platform but yet to be peer-reviewed, is one of the first such done in the country involving its main two vaccines - Covishield, a licensed version of the AstraZeneca shot, and domestically developed Covaxin.

Health officials say though they are studying the evolving science on booster doses, the priority is to fully immunise India's 944 million adults.

More than 60 per cent of them have received at least one dose and 19 per cent the required two doses.

Covid-19 cases and deaths in India have come down sharply since a peak of more than 400,000 infections in early May.