Smoke is seen at LG Polymers plant in Visakhapatnam, India, May 7, 2020.

Indian officials were evacuating more people on Friday from the area around a chemical plant in the south of the country that leaked toxic gas, killing at least 11 people and sickening hundreds more.

There was confusion about whether the wider evacuation orders were sparked by a renewed leak at the LG Chem factory in Andhra Pradesh, or by the fear that rising temperatures at the plant could lead to another leak.

"The situation is tense," said N. Surendra Anand, a fire officer in Visakhapatnam district, adding that people in a 5km radius of the factory were being moved out.

South Korea-based LG Chem said on Friday that contrary to earlier reports, "it has been confirmed there was no second gas leak at the plant".

"We have asked the police to evacuate residents near the plant as a precautionary measure," a spokesman said. The company was concerned that temperatures in a 3,000 ton gas tank holding styrene would rise, but is taking measures such as putting water into the tank.

"Investigations are still under way to determine the cause and damage of the accident. We have no further details to share with media at this moment," the spokesman said.

Srijana Gummalla, commissioner of the Greater Visakhapatnam Municipal Corporation, downplayed concerns surrounding vapour emanating from the plant, saying the gas coming out had been fluctuating through the day and had largely subsided.

"The evacuation being carried out is a part of safety precautions we are taking," she said.

Around midnight, police started urging people to move out of their houses and into waiting buses, said local resident Sheikh Salim, who lives about 2.5km from the plant. 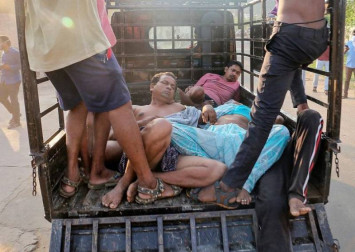 Earlier on Thursday, LG Chem and federal authorities in New Delhi had said the leak had been contained. A 3km radius had been evacuated after the leak.

The factory, operated by LG Polymers, a unit of South Korea's biggest petrochemical maker LG Chem, was in the process of reopening after a weeks-long lockdown imposed by Indian authorities to curb the spread of the novel coronavirus, local officials and the company said.

Gas from styrene, a principal raw material at the plant, leaked during the early hours of the morning, authorities said.

Andhra Pradesh Chief Minister Jagan Mohan Reddy said in a televised address on Thursday that the gas leak occurred because raw material had been stored for a long period of time.