'This is Indonesia': Asian Games race-walker collapses after 50km of heat, smog

South Korean Joo Hyun-myeong gets water from medic after he finishing the men's 50km walk race competition during the 2018 Asian Games in Jakarta on August 30, 2018.

Indonesia's Hendro said it was a "miracle" to even finish the 50km race walk in Jakarta's brutal pollution, heat and humidity Thursday after he was carried from the finish line on a stretcher.

The air quality index in central Jakarta hit 163 on Thursday morning. A reading of more than 150 is considered a health threat to the general population.

After being doused in ice water by medics Hendro, 28, who like many Indonesians goes by one name, was carried to the medical centre shouting incoherently with pain.

"The race was so difficult -- the hot weather, humidity, and not just the humidity but the pollution," he said after recovering.

"Racing here is not easy. This is Indonesia." Hayato Katsuki of Japan took gold with 4:03:30 -- 23 minutes slower than the last Asian Games -- with a well-judged race, after making holes in his vest to improve ventilation.

Fellow Japanese Satoshi Maruo set the pace for much of the way but fell back in the final 10km, ending 10 minutes behind the winner and out of the medals.

"It was just so hot. The walkers in front went fast at the beginning but I paced myself as I knew they would slow," said Katsuki.

"I was prepared. I made cuts in my vest to help the air flow."

The winning time was the slowest since the 1990 Asian Games in Beijing.

Three racers did not finish.

Hendro's efforts drew the biggest cheers from the home crowd, applauding his brave effort as he persevered long after any medal chance had vanished, to finish in 4:32:20. 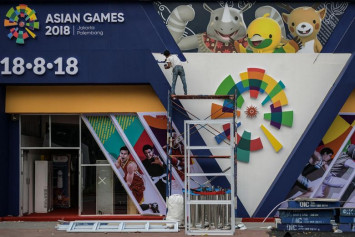 As well as finding it hard to breathe, he was battling an old ligament injury in his right knee.

"It was so painful," he said. "I was thinking -- I must finish. This is my first time in the 50km. I didn't want to make my coach disappointed.

But Hendro also called for future races to be shifted away from hazy Jakarta to elsewhere in Indonesia's Java island.

"There are no trees here, all buildings," he said. "In the low altitude, pollution and humidity, it is difficult for all Asians," he said.

Jakarta's air pollution came under fire earlier in the Games when activists unfurled a giant banner showing a person wearing a gas mask and the message "#WeBreatheTheSameAir".