A spokesman for Indonesia's environment ministry said that the World Wildlife Fund fanned social media criticism of efforts this summer to stamp out blazes in Sumatra and Borneo islands that spewed toxic haze across the region.

JAKARTA - Indonesia said on Wednesday (Jan 29) it has cut ties with the World Wildlife Fund (WWF) as it accused the global conservation group of overstepping its mandate in the country and unfairly criticising efforts to extinguish out-of-control forest fires last year.

The South-east Asian nation said it had sent a letter to the WWF's domestic office last week terminating a cooperation agreement that stretched back to 1998.

The agreement involved joint work in the area of wildlife conservation and forestry, it added.

An environment ministry spokesman said the WWF improperly extended its work across the archipelago into areas linked to climate change, waste management and environmental issues.

He added that the group also fanned social media criticism of efforts this summer to stamp out blazes in Sumatra and Borneo islands that spewed toxic haze across the region and released vast amounts of greenhouse gases.

"They negated and discredited government efforts" to extinguish the blazes, said the spokesman, who asked not to be named.

"A cooperation agreement must be in line with its legal mandate and show mutual respect."

The group countered that its activities were within the limits of the cooperation agreement.

"WWF Indonesia is committed to fulfilling its role and obligation as a member of civil society and to take part and contribute to the sustainable management of natural resources," spokesman Kuntoro Mangkusubroto told AFP. 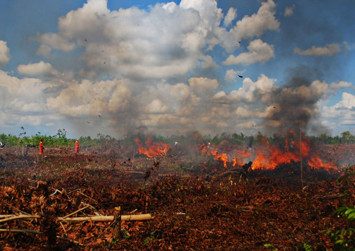 It was not immediately clear what severing the agreement would mean for WWF's future work in the sprawling nation.

Based in Jakarta, the WWF Indonesia has some two dozen field offices engaged in conservation work including on-the-ground projects, research and advising local governments on environmental policy, it said on its website.

The group has operated in Indonesia since the early 60s, it said.