Indonesian authorities mandated on Monday that ride-hailing motorcycle service providers will only be able to charge rates within a fixed band, a move that could put hurdles in the expansion plans of Go-Jek, Grab and other ride-hailing firms.

JAKARTA - Indonesian authorities mandated on Monday that ride-hailing motorcycle service providers will only be able to charge rates within a fixed band, a move that could put hurdles in the expansion plans of Go-Jek, Grab and other ride-hailing firms.

Starting May 1, motorbike ride-hailing rates will have to be between 1,850-2,600 rupiah (S$0.17 - $0.24) per kilometre, depending on the zone and distance travelled, Budi Setyadi, director general of land transportation at Indonesia's Ministry of Transportation, told reporters.

The area around the Indonesian capital of Jakarta, known for some of the world's worst traffic congestion, will be part of a zone with a higher tariff of 8,000 to 10,000 rupiah per ride of up to four kilometres.

"This is to protect the interests of drivers and consumers," Setyadi said, adding the rates would be higher than the ones currently offered by companies and would be reviewed every three months.

Funded by some of the biggest private investors in the world, Singapore-based Grab and homegrown Go-Jek have been locked in price wars in Indonesia, part of a broader multi-billion dollar fight to bring banking, e-commerce, ride-hailing, food-delivery and other services to every corner of Southeast Asia.

Analysts say fixed fares would mean companies' ability to discount may be impacted and they may have to share more with the drivers. It could also make them less competitive with other transport options. 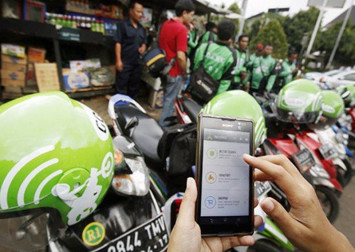 Since 2018, motorcycle taxi drivers working for Grab and Go-Jek in Jakarta have held protest rallies calling for higher fares and better conditions.

Setyadi said the range for the tariffs had been decided following extensive discussions with all parties, including drivers and consumers associations and Indonesia's anti-monopoly watchdog.

Grab Indonesia's head of public affairs Tri Sukma Anreianna said in a statement that the company had taken an active part in the discussions over the regulation, including in determining appropriate rates.

A spokesman for Go-Jek said they would need to study the impact on consumer demand and drivers' income before commenting on the fixed rate range.

Due to their affordable prices and the limited availability of public transportation, motorbike ride-hailing taxis have become the principal mode of transportation for many in Southeast Asia's biggest economy.

Grab and Go-Jek drivers interviewed by Reuters welcomed the prospect of standard fares.

"I've worked with Grab for three years and the rates have become much too cheap because of the competition with Go-Jek," said Grab motorbike chauffeur Dhicka.

Ride hailing services in Southeast Asia are expected to surge to about US$20 billion (S$27 billion) in gross merchandise value by 2025, according to a Google-Temasek report.