A handout photo. Indonesian President Joko Widodo inspects an area that will be the site of the new capital city, during sunrise in Penajam Paser Utara regency, East Kalimantan province, Indonesia, on March 15, 2022.

JAKARTA - Indonesian President Joko Widodo has sought to rein in speculation that he intends to stay in office beyond his legally mandated two terms, ordering ministers this week to cease calls for an extension or postponement of elections due in 2024.

The proposal to extend his term, either via a constitutional amendment or an election delay, had recently appeared to gain momentum in the world's third-largest democracy after several influential political figures publicly backed it.

This week, the president, better known as Jokowi, ordered his cabinet to stop bringing up the idea and instead focus on addressing economic hardships being faced by the public.

"Don't let there be anyone who talks about delaying (the election), or an extension (of the presidential term). Enough," he told a plenary cabinet meeting on Tuesday (April 5), in remarks that were released a day later on the state secretariat's YouTube channel.

The idea of extending his term has fuelled concerns about a threat to hard-won democratic reforms, with critics slamming what they say are his ambiguous responses to the proposal.

The president has consistently said he would abide by the constitution without addressing what he might do if the law was amended to allow him to seek a third term.

Supporters of the idea say Jokowi needs more time to oversee economic recovery and implement his agenda, which has been disrupted by the pandemic.

Indonesia's constitution mandates that a president can serve a maximum of two, five-year terms, but discussion by legislators about separate constitutional amendments has raised concern that changes to term limits could also be on the table. 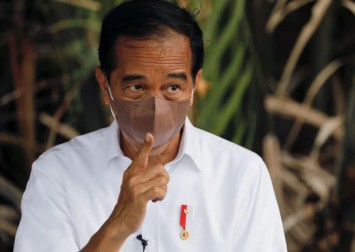 First elected in 2014, Jokowi retains a high approval rating, but a recent poll by Saiful Mujani Research and Consulting shows that more than 70 per cent of Indonesians reject the extension plan.

But some called on the president to make his position clearer.

"What's so hard for the president to say: 'I reject the term extension, I reject delaying the election, I don't want to run for a third term?" said Edbert Gani, an analyst at the Center for Strategic and International Studies in Jakarta.

"It's difficult for the public to guess the real situation if the president doesn't make a very clear statement."