TIGARAS, Indonesia - Indonesian police on Thursday questioned the captain of a ferry that sank without trace in a volcanic lake in Sumatra this week, warning that a criminal investigation could be launched over a disaster that has left at least 192 people missing.

Desperate relatives awaiting news of loved ones prayed and sang hymns at the port on Lake Toba after one of Indonesia's worst ferry disasters in years left four confirmed dead and 18 survivors, including the captain.

"We see there's a possibility to begin a criminal investigation because of negligence that resulted in people losing their lives," national police chief Tito Karnavian said during a visit to the base of rescue operations at the lake, one of the world's deepest.

"The captain may be named a suspect," Karnavian said, adding that regional transport officials would also be questioned about supervision.

Authorities were trying to get clearer information from the captain and survivors on where the vessel went down.

"(The captain's) health remains unstable. We asked him some questions, but he has yet to remember clearly," police official Agus Darojat told Metro TV.

Teams of divers resumed a search for the wooden ferry, which may have had aboard nearly five times the number of passengers it was supposed to carry when it went down in bad weather on Monday. 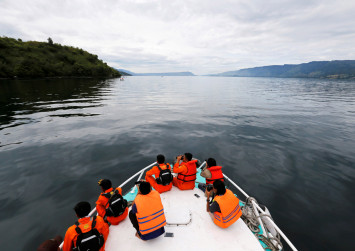 "We've expanded (the search area) from 6 km to 10 km," Budiawan, an official of Indonesia's search and rescue agency, told reporters. That is equivalent to a range of 3.7 miles to 6.21 miles.

Authorities were waiting for more sophisticated navy equipment that can plumb depths of as much as 450 meters (1,500 feet) in some places, he added.

The picturesque lake fills the caldera of a giant ancient volcano that erupted about 75,000 years ago in one of history's biggest eruptions.

On the quay, hundreds of people sang hymns, some in the regional Batak language, in an area of predominantly Muslim Indonesia that is home to a large Christian community.

Waiting at the quayside for news of the family of her 20-year-old daughter who took the ill-fated ferry, one distraught mother criticised the disorganized nature of the initial rescue effort.

"Just looking at the videos of them throwing lifesavers, it looked haphazard," the woman, Turia, said on Wednesday, describing attempts by nearby ships to help survivors.

The mobile telephone of Turia's daughter, who was accompanied on board by her husband and the couple's 2-1/2-year-old daughter, has not been active since Tuesday, Turia added.

Last week, 13 died after a boat carrying about 43 people sank off Makassar on Sulawesi island, while a speedboat carrying 30 passengers sank off South Sumatra, killing at least two.

In Lake Toba, there has also been a string of previous accidents, including a 1997 sinking that killed about 80 people.

"I ask that this kind of case will not happen again and I have asked the transport minister to evaluate all safety standards for ferry transport," he said in a statement late on Wednesday.