KUTA, Indonesia - Authorities on the Indonesian tropical island Bali released 33 endangered green sea turtles into the ocean on Saturday (Jan 8) in an effort to boost a population threatened by poachers and illegal traders.

The turtles, from the Chelonia mydas species that is protected in Indonesia, were released on Kuta beach after they being rescued during a Navy operation against poachers in December.

Tourists gathered to watch and film the release on their mobile phones, cheering the turtles on as they trudged across on the beach.

"It's a great idea for the conservation effort," said Australian tourist Briant Firth. "They were getting some of the poachers and they were saving the turtles."

Indonesia has become a hub of international trafficking of marine turtles, feeding demand from countries like Malaysia, Vietnam and China. Anyone convicted of involvement in the trade can be jailed for up to five years under Indonesian law. 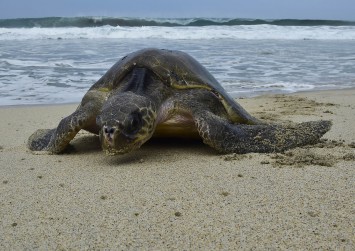 The turtles had been in rehabilitation at the Bali Conservation and Natural Resources Agency, authorities said.

"They are evidence in a naval operation ... we are releasing them because we can't keep these wild animals as evidence long," Deputy Chief of Naval Staff Ahmadi Heri Purwono told reporters.

"With the release, hopefully they go on and reproduce," he said, adding that this could help improve marine ecosystem around Bali island.

The population of green turtles, one the largest sea turtles, has been on a significant decline in recent years due to hunting, loss of beach nesting sites and getting caught in fishing gears.

They are also victims of the world's growing ocean plastics crisis. The creatures are known for eating plastic bags, mistaking them for jellyfish, according to the World Wildlife Fund, which said many turtles had plastic in their stomachs.