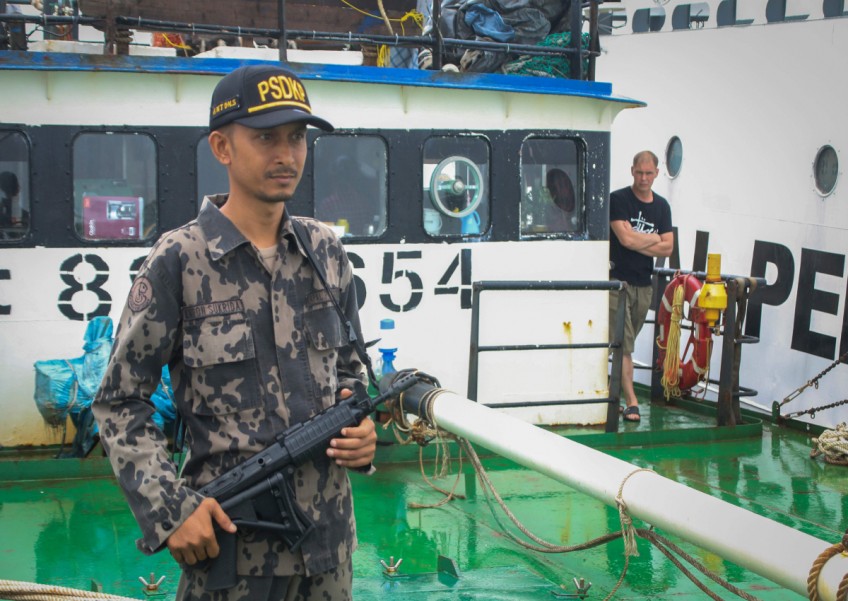 In this photograph taken on July 15, 2019 an Indonesian officer stands guard on board the MV Nika vessel after being detained by Indonesia's authority in Batam, Kepulauan Riau.
AFP

JAKARTA - A notorious Panama-flagged vessel wanted by Interpol for illegal fishing has been seized by Indonesia, the authorities said on Tuesday (July 16).

The MV NIKA - a vessel with an extensive maritime rap sheet - was intercepted by the navy last Friday in the Strait of Malacca, the fisheries ministry said on Twitter.

The 750-tonne vessel had 18 Russians and 10 Indonesians aboard, the Jakarta Post reported. The crew have been detained and are now being questioned.

The ship is suspected of falsifying registration documents and claiming it was a bulk carrier instead of a fishing boat in order to avoid detection, said fisheries minister Susi Pudjiastuti said.

"This ship has been wanted by Interpol in many countries for a long time," she told broadcaster TVOne.

"The ship kept changing flag. The last one it used was Panama's... which is typical of ships used in illegal, unreported, and unregulated fishing."

Boats involved in illegal fishing often obscure their origins by using foreign flags, a system that complicates monitoring and oversight by allowing ships to register outside of the vessel owner's country.

Indonesia, the world's biggest archipelago nation, has launched a crackdown on foreign vessels fishing illegally in its waters, claiming it costs the economy billions of dollars annually.

Jakarta has sunk hundreds of foreign vessels caught fishing without a permit after impounding the boats and removing the crews.