SINDANGSARI - Shock and delight rippled through the Indonesian town of Sindangsari on Monday (March 11) as residents got word that a local woman accused of assassinating the North Korean leader's half-brother had been freed.

Reeling from the news, Ms Siti Aisyah's aunt geared up for a party to welcome back her 27-year-old niece, a year and a half after she went on trial in neighbouring Malaysia with the death penalty hanging over her head.

"Thank God. I want to say a thousand 'thank you's' if it's really true that she has been freed," Ms Aisyah's aunt Darmi, who goes by one name, told AFP.

"They should bring her here straight away because she's not guilty. We've heard the news and we're so happy. We're getting a celebration ready!

"Thanks to everyone who took care of my niece."

Ms Aisyah's parents were in the capital Jakarta on Monday to await their daughter's return, after a flurry of diplomatic efforts between the two Southeast Asian neighbours. 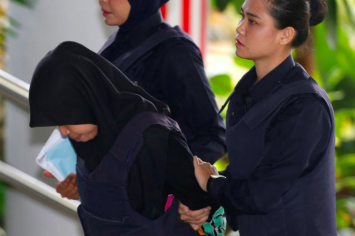 In Kuala Lumpur, Ms Aisyah smiled as she was ushered through a pack of journalists and into a car outside the court, where she had been on trial alongside a Vietnamese woman for the murder of Mr Kim Jong Nam at Kuala Lumpur airport in February 2017.

The pair had always denied murder, saying they were tricked by North Korean spies into carrying out the Cold War-style hit using VX nerve agent and believed it was a prank for a reality TV show.

The judge unexpectedly agreed to a request at Monday's hearing to withdraw the murder charge and release Ms Aisyah, although it did not amount to a full acquittal.

Back in Sindangsari, about 100km west of Jakarta, the family's neighbour Darsinah recalls watching Ms Aisyah grow up as an "innocent and naive" little girl.

"Never made a fuss. Very obedient and polite," said the woman, who like many Indonesians goes by one name.

Ms Aisyah herself struggled to imagine that she was going home - and had escaped a murder conviction that could have led to her hanging execution.

"I had already surrendered myself to God," she told Indonesia's Kompas TV in an interview from the Malaysian capital.

"It was the support of my family - my mother, my father - and the embassy, that kept me going. Now I want to see them."

Asked if she would ever return to Malaysia, the woman replied: "Who knows - but I don't want to be here right now ... I want to stay in Indonesia."