JAKARTA - Ghosts and vampires greeted voters at a South Jakarta polling station on Wednesday (April 17), as Indonesian election officials pounced on creative ways to draw crowds to the ballot box.

And like any fancy dresser fully committed to playing the part, each of these officials at the Jalan Gunung Balong station had a story on how they "died".

"I got run over by a bus," logistics worker Mohammad Dasir, 42, told The Straits Times as he guided arriving voters shrouded in a kafan, a white sheet typically used to wrap bodies in Muslim burials.

His neighbour Andi Alfaqi, 20, claimed he died after someone hit his head with a shovel while he was asleep. He accessorised his vampire outfit with a shovel to back up his story.

The university student was helping voters dip their finger into a semi-permanent ink bottle, a method used in Indonesia to prevent double voting.

Officials at other polling stations also dressed up, lending a festive feel to the election.

In Surabaya, East Java they wore superhero costumes with Spiderman and Thor putting in an appearance. Meanwhile cowboy outfits, complete with sheriff badges, and Chinese traditional attire were spotted at polling stations in Cibadak, Bandung.

Head of the Gunung Balong polling station committee Adnan Yasin, 37, told reporters that more residents did show up to vote, compared to the last election in 2014.

"I would say our turnout this time around reached 80 per cent, from around 65 per cent five years ago," he told reporters after polls closed at 1pm.

Read Also
Polls close in Indonesia, next president should be clear within hours 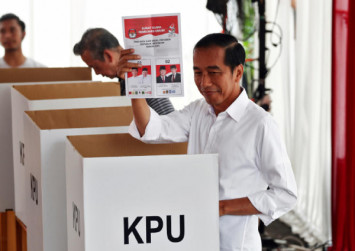 Mr Adnan, himself dressed as a vampire, said the volunteer officials manning the station spent their own money on their costumes.

Funds for the decorations - including gravestones and a fortune teller booth - came from the tent hire cost allocated by the general election commission (KPU). Instead of hiring a tent, the officials utilised a pavillion at a resident's house, free of charge.

"We wanted to introduce funny and scary elements to our polling station. This would spark curiosity, and make people come. It worked well," Mr Adnan said.

When asked by The Straits Times how he died, Mr Adnan said: "I was bitten by an older dracula."