PARUNG, Indonesia - On the outskirts of suburban Jakarta, housewife Dita Agusta lives with more than 250 cats she has taken in off the streets, creating a shelter for the animals she hopes will one day be adopted.

"It is hard to see abandoned cats on the streets," Agusta, 45, told Reuters.

She had wanted to rescue cats since she was a child and saw stray cats running wild around her neighbourhood.

When she and her husband, Mohamad Lutfi, a catfish farmer, moved four years ago from Bekasi city in West Java to a bigger house in Parung in the same province, south of Jakarta, she was able to take action and began taking in cats.

Now the couple spends at least one million rupiah (S$97) a day to cover the cost of food, medicines and litter for the 250 cats they keep.

They also employ a pool of five workers to clean the entire house twice a day to make sure the shelter is hygienic. 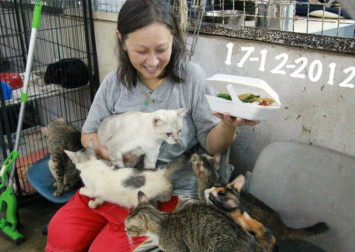 She says she does not take in healthy-looking cats, only ones that need help, and expects disabled cats to stay in her shelter forever.

She also regularly walks throughout her neighbourhood putting down food for every cat she encounters.

In her home, all 250 cats are neutered to contain the population.

They are also groomed to ensure they don't create health risks for the surrounding community.

ALSO READ: Want to be a cat fosterer or rescuer? Here are 5 things you should know