Indonesian man kills colleague who called him fat, sets her body on fire

One Indonesian man lured his colleague to a coconut plantation, strangled her, and set her body on fire. The reason? She had called him fat one too many times.

Ali Heri Sanjaya, 27, was arrested on Jan 28 after his colleague Rosidah, 18, was found dead in a village in Banyuwangi, Java, reported Indonesian media outlets.

Ali and Rosidah worked together at a restaurant and had known each other for years as they lived in the same neighbourhood.

Rosidah's family first became suspicious when she did not return home on Jan 24. They made a police report, but it was too late.

Her charred body was found at a village the next day, her pink motorcycle helmet a short distance away.

Rosidah had allegedly bullied Ali, called him fat and compared him to a sumo wrestler in front of others, causing him to become "bitter" and "hurt", Arman said.

On the day of the attack, Ali waited for Rosidah to knock off and asked her to give him a lift home on her motorcycle.

Read Also
'You're fat': Woman allegedly body-shames man after he helps her 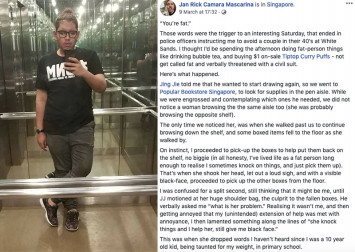 When they reached the coconut plantation at Pondok Nongko Village, he asked her to get off the vehicle, strangled her and set her body on fire using gasoline that he had bought.

Ali then hid in a hotel until he was tracked down and arrested.

In a video shared on Facebook after Ali's arrest, he appeared to be in good spirits.

He smiled as he tucked into a plate of food and even nodded when a man in the background asked him if he still had the appetite to eat.

Rosidah's uncle, Ahmad Sodik, expressed his relief that Ali had been detained and called for him to be punished heavily.

He added: "This despicable criminal deserves the death sentence."

If convicted of murder, Ali faces capital punishment or imprisonment from 20 years to life.

#Murder/Manslaughter #INDONESIA #In Case You Missed It