Indonesian tries to sell kidney for son's brain tumour op, hospital does it for free

"Kidney for sale. I am selling my kidney for the treatment of my child's brain tumour," read the sign around Eli Kristianto's neck.

Desperate to raise money for his son's surgery, the 59-year-old had decided to sell his kidney. Not knowing how to find a buyer, he had stationed himself at the entrance of Tanjung Balai Karimun port in Riau with his sign.

Photos and videos of the heart-wrenching scene circulated on social media and Kristianto's story made headlines in Indonesia last week.

Kristianto's son, Elandra Wiguna, 23, had been receiving medical treatment at Muhammad Sani Regional General Hospital (RSUD), but was sent home because the family was constrained by costs, reported Kumparan.

After Kristianto's story went viral online, RSUD announced that they would operate on Wiguna for free. They also said that their initial plan to transfer Wiguna to another hospital in Batam had been cancelled.

A neurosurgical team consisting of eight doctors operated on Wiguna on July 1. Doctors told Indonesian media that the surgery went smoothly and that Wiguna is in stable condition. 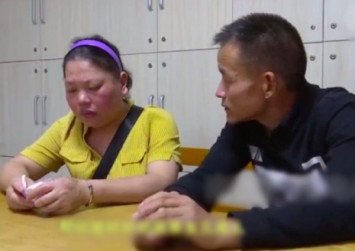 RSUD director Zulhadi said that the hospital would help Wiguna's family apply for a Certificate of Need (SKTM) which would take care of all his medical fees in the future.

According to Kompas, Indonesia's national healthcare programme (BPJS) had previously only covered part of Wiguna's treatment costs. As a result, Kristianto had reportedly accumulated a debt of 14 million rupiah (S$1,342) paying for his son's treatments.

While the sale of organs is illegal in Indonesia, Kristianto told Kumparan that he was at his wit's end. He said, "I was confused, I did not know what else to do to find money for the treatment fee for my child."

Kristianto is not the first to put his kidney up for sale to cover medical costs. ABC News reported in 2018 that needy Indonesians had taken to Facebook to sell their kidneys.

Indonesian Dialysis Community (KPCDI) chairman Tony Samosir said that despite being in violation of the law, selling organs on the black market is often the only way for patients to raise money.

According to Samosir, a kidney on the black market can fetch between 100 and 350 million rupiah.

#INDONESIA #Healthcare #Medical fees #poverty #In Case You Missed It