KUALA LUMPUR - Less than half of the garbage produced on Indonesia's resort island of Bali is recycled, with thousands of tonnes burned or dumped in rivers and the ocean, researchers warned on Thursday (June 20).

Only 48 per cent of Bali's trash is managed responsibly through recycling or landfill, according to a five-month study by The Bali Partnership - the first step for the group's ambitious goal to end plastic pollution on the island and spur action beyond.

"What happens in Bali will always be noticed by the world," Ida Bagus Mandhara Brasika of the Bali Governor's waste management task force said in a statement. "In Bali we are now at the right moment to stop our ocean leakage... We'll start from Bali and the impact will be global."

The Bali Partnership, backed by Norway, is a new organisation uniting Indonesia's central and local governments, academics, waste experts and businesses, to support a national commitment to reduce ocean plastics by 70 per cent by 2025.

Like many parts of Asia, the Indonesian archipelago of more than 17,000 islands has a fast-growing economy and population, and a huge coastline with many densely populated cities. 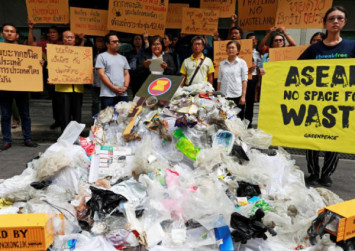 These factors have created a "perfect storm" for trash finding its way into the surrounding seas, green groups said.

Garbage collection, recycling and other waste infrastructure have largely failed to keep pace with rapid development.

In Bali, which attracts about 6.5 million international tourists annually, trash regularly washes up on its once-pristine beaches.

"We can see with our own eyes - without a microscope - the small pieces of plastic on the beaches," said Gede Hendrawan, a professor at Bali's Udayana University who led the research.

The survey, which monitored the island's rivers and landfill sites and included 950 local households, as well as interviews with waste officials and volunteers, found Bali generates about 1.6 million tonnes of waste each year.

Indonesian and international tourists generate more than three times of waste per day than Bali residents, the study showed.

It is hoped Jakarta will use the findings to improve waste management and tackle the problem of plastic waste in oceans.

Two years ago, the government launched a national action plan pledging up to US$1 billion (S$1.4 billion) to cut ocean waste 70 per cent by 2025.

"Now we have comprehensive data to support the government's commitment to reduce ocean plastics by 2025," Hendrawan told the Thomson Reuters Foundation.

At a leaders' summit starting on Thursday in Thailand, the 10-member ASEAN is expected to adopt a Bangkok Declaration on Combating Marine Debris.