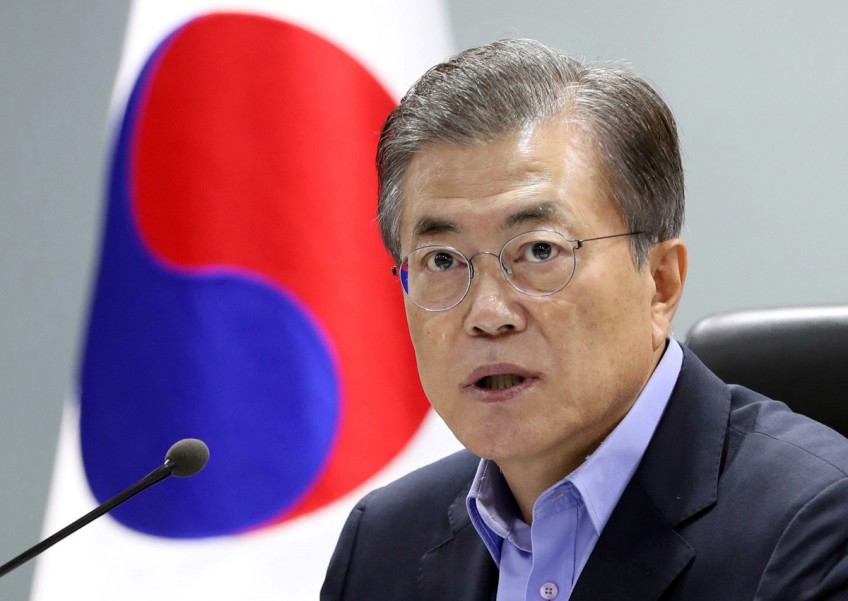 Japan and North Korea should begin talks to normalise relations between the two countries and contribute to peace and stability in the region, South Korean President Moon Jae-in told a Japanese newspaper on Tuesday.

"In particular, I think dialogue between Japan and North Korea should be resumed," Moon said in the interview with the Yomiuri newspaper.

"If Japan-North Korea relations are normalised, that would greatly contribute to peace and security in Northeast Asia beyond the Korean peninsula," he said in written answers to questions submitted by the newspaper.

At Moon's summit last month with North Korean leader Kim Jong Un, both sides agreed to work toward denuclearization. Kim said during that meeting he was "ready to have a dialogue with Japan anytime", Moon told the newspaper.

There was no immediate comment from the Japanese government, which has called Pyongyang's nuclear weapons and missile programs the toughest security threat facing Japan since World War Two.

Moon's interview was conducted ahead of a summit on Wednesday between Moon, Japanese Prime Minister Shinzo Abe and Chinese Premier Li Keqiang in Tokyo.

Nevertheless, months of frosty relations between Beijing and Pyongyang appear to have thawed since Kim's secretive visit to Beijing in March, where he met Chinese President Xi Jinping.

Analysts said Kim's meeting with Xi strengthened North Korea's negotiating position by aligning the two nations ahead of Kim's summit with US President Donald Trump in the coming weeks.

The North Korean official flew in a private plane and arrived at Dalian airport on Monday amid heavy security, Yonhap said. It did not identify the official.

In the interview, Moon said Kim's desire for "complete denuclearization" laid the groundwork for the future summit between the United States and North Korea, although it remained to be seen if concrete steps were agreed at the talks.

Trump has said he will maintain sanctions and pressure on the North and "not repeat the mistakes of past administrations", and has said his tough stance had led to the breakthrough.

Moon said Kim was "a very open and practical person" and both leaders had a mutual goal for the denuclearization of the Korean peninsula.

"From now on, based on our deep mutual trust, we'll make bold steps toward peace and prosperity, and unification," Moon said.