In this photo taken on July 28, 2018, people protect themselves with umbrellas as heavy rains caused by Typhoon Jongdari fall in Tokyo.

TOKYO - Japan is bracing for heavy rains and high winds on Wednesday as a strong typhoon is forecast to make landfall near the capital of Tokyo, the latest storm to hit Japan in recent months.

Typhoon "Shanshan", a Chinese girl's name, is currently a Category 2 typhoon but is expected to weaken slightly as it moves closer to the eastern part of Japan's main island of Honshu, drawing near to Tokyo in the early hours of Thursday and possibly snarling the morning rush hour.

The Japanese Meteorological Agency warned that Tokyo and surrounding areas could get as much as 350 mm (14 inches) of rain in the 24 hours to noon on Thursday, with winds gusting as high as 180 kmh (111 mph).

Shanshan is expected to move extremely slowly, perhaps as slow as 15 kmh (9 mph), meaning intense rain may fall in one area for an extended period. 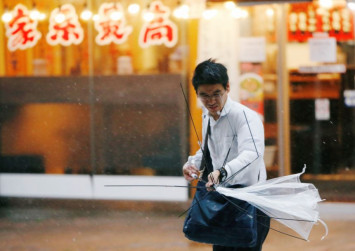 After pounding the area near Tokyo the storm is expected to rake the northeastern part of Honshu before weakening to tropical storm strength and heading out into the Pacific.

Western Japan, the site of deadly floods in July, will be spared.

Japan has been hit by one weather disaster after another since the start of July, including a record-breaking heatwave that saw temperatures surge to 41.1 Celsius (106 Fahrenheit) and killed at least 132 people as of August 5.