Operations were under way to dig out and clear up after the devastating floods and landslides that engulfed entire neighbourhoods.

But with around 60 people still feared missing, local authorities said they would continue searching house by house looking for survivors, or victims.

"The critical 72 hours have passed," acknowledged Mutsunari Imawaka, an official with Okayama prefecture, one of the worst-hit regions.

"But we will continue our search believing there are still survivors," he told AFP.

He said at least 18 people were missing in Okayama alone, and that several thousand people were checking houses across the region.

Read Also
Japan hit by worst weather disaster in decades: Why did so many die? 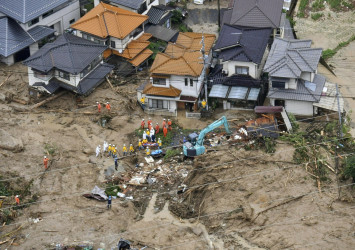 The rains are the deadliest weather-related disaster in over three decades in Japan, and the size of the death toll has raised questions about whether authorities were sufficiently prepared.

Government spokesman Yoshihide Suga on Wednesday said there would be a review of disaster management policies.

"In recent years we have seen damage from heavy rains that is much worse than in previous years," he said.

"We have to review what the government can do to reduce the risks."

Prime Minister Shinzo Abe, who cancelled a foreign trip as the death toll rose this week, brushed aside criticism of the response during a trip to Okayama on Wednesday.

"We have done our best since the disaster happened," local media quoted him as saying.

On Thursday, he pledged to ramp up help for affected areas and said the government had secured around 71,000 temporary homes for evacuees.

"Looking ahead, as we are expecting a massive amount of disaster-generated waste, I plan to send a team to each prefecture to support" clean-up efforts, Abe said, according to footage of a morning meeting broadcast on local television.

The government has already said it will set aside around $20 million for the relief effort and Abe said there would be financial support for local governments to help with the reconstruction effort.

At least 64 killed in Japan after 'unprecedented' rain

Abe, who is expected to visit another disaster-affected area on Friday, said the government would "do everything we can so that people will not have to continue living in uncomfortable situations in shelters".

Around 10,000 people whose homes were buried by landslides or submerged in flood waters are still in shelters.

Even some of those whose homes were not destroyed were struggling with water and electricity shortages.

Military vehicles were being used to bring drinking water to areas without supplies, and a steady stream of volunteers were signing up to help the clean-up operation or offer donations.

The scale of the disaster means the process of returning to normal life will be slow, officials said.

"We don't know how long it will take for the recovery," said Okayama official Imawaka.

"The roads and water systems are damaged, so it's hard to predict at this moment."

And authorities warned against the ongoing risk of landslides, with rain forecast in some areas on Thursday, as well as heatstroke in other places where temperatures approached 35 degrees celsius.