Princess Ayako, 27, will be renouncing her royal status.

The third daughter to Princess Hisako and late Prince Takamado (the cousin of Emperor Akihito) will be marrying a commoner who works in a shipping firm, Kei Moriya.

According to Japan Times, the two were introduced by Princess Hisako late last year.

The 32-year-old man who graduated from the prestigious Keio University and works at NYK Line, is also a board member of Tokyo-based non-profit organisation Kokkyo naki Kodomotachi (KnK), which aims to improve the lives of children and youth in Asia.

His late mother, who was a longtime friend of Princess Hisako, was an executive board member for the same organisation. Princess Hisako reportedly introduced the two as she hoped that it might spark Princess Ayako's interest in welfare activities for children.

The latter has a master's degree in social work and has studied at Canada's Camosun College and the University of British Colombia.

She is an Honorary Patron of the Canada-Japan Society, an organisation that aims to build better relations between Japanese and Canadians. The engagement will be announced on Monday, but the official engagement ceremony will only take place on August 12. The pair reportedly will be tying the knot two months after, on October 29 at the Meiji Jingu Shrine.

Princess Ayako is not the only princess to have renounced her royal status for love. 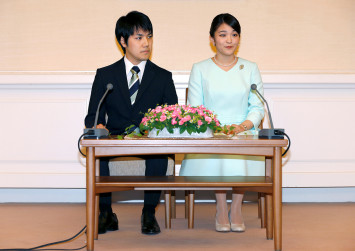 Last year, her cousin, Princess Mako, announced that she would be giving up her status to marry a commoner. Although their wedding was initially scheduled for later this year, they announced that it will be postponed to 2020 due to a lack of preparations.

While some reports claimed it could be due to the rumours surrounding the financial difficulties her fiance's mother allegedly faces, others think it could be because she wants to remain as a princess long enough to witness the abdication of her grandfather, Emperor Akihito, next year. The emperor will be abdicating due to old age and poor health.

Based on the current law, only males can be in line to take over the throne, which is why princesses have to renounce their royal status should they marry a commoner.

After giving up their status, they would no longer be able to attend royalty-related ceremonies, including the abdication ceremony.