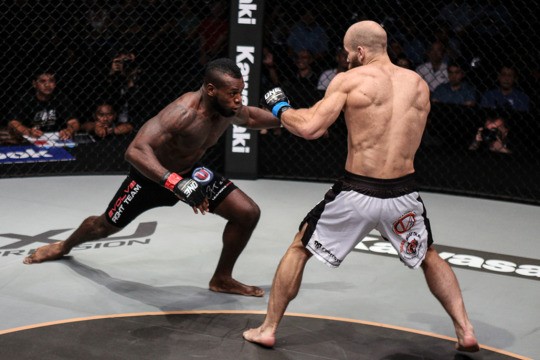 Leandro Ataides and Vitaly Bigdash have been at the very top of the ONE middleweight division for a while now, but they’ve never met inside the cage.

That will all change on Saturday, 12 May, however, when the pair do battle at ONE: GRIT AND GLORY in a pivotal contest in Jakarta, Indonesia.

Ataides and Bigdash were originally set to compete at ONE: KINGS OF COURAGE in January, but a staph infection forced former world champion Bigdash out of the contest.

“Vitaly got an infection in his knee, and could not compete,” the 31-year-old Brazilian told ONE Championship.

“Then I got a new opponent, but the doctors said he was not allowed to fight either. I felt very sad, because I worked really hard. But sometimes, there are things we cannot control.”

With no opponent cleared to face him, Ataides also missed out that night. But now the stars have aligned, and the pair are set to finally meet at the Jakarta Convention Center on 12 May.

“I did not mind if they offered me another fight straight away, or if they wanted me to wait for Bigdash to be better, as I know everybody wanted to see that match-up,” he said.

“I work for ONE Championship, I do not ask for any bouts. I just stay healthy and listen to them when they say I have to be ready.”

As it turned out, the Bigdash bout was indeed the one everyone wanted to see happen, and the bout was rescheduled.

Both men will head into the contest after back-to-back training camps preparing for each other, and Ataides said he’ll be even more ready for the Russian than he was earlier this year.

“I will be more prepared this time,” the Brazilian says.

He faces as tough a test as he’s ever encountered inside the ONE Championship cage. Bigdash is a former ONE Middleweight World Champion with impressive power and an even more impressive gas tank.

The Russian knocked out Igor Svirid to win the title back in a thrilling comeback performance in October 2015, then defended it against Aung La N Sang in January 2017. However, he then lost the belt to “The Burmese Python” in a highly-competitive rematch in June the same year.

Both Ataides and Bigdash know that an impressive victory could be all that stands between them and a shot at Aung La N Sang and the middleweight title, meaning the stakes in their matchup couldn’t be any higher.

Ataides usually trains at his usual gym at Nova Uniao in Brazil, but for this contest, he’s made a big change, and travelled 11,000 miles from home to base himself at Capital Training Center MMA in Beijing, China. It’s a different setup, with different surroundings, and offers a fresh environment for the five-time BJJ world champion to sharpen his skills ahead of the contest.

“Brazil is my home, but I like to do my training here, because I have good training partners and coaches,” he explained.

“Here, everyone comes to help me, and I have my coaches for everything. I am blessed to have the people I have around me, and because of them, it makes me very confident.”

Ataides’ grappling credentials leap off the page. A five-time Brazilian jiu-jitsu world champion, Ataides is also a former middleweight title challenger with impressive power, and a fast-evolving striking game that has made him a major threat in the stand-up, as well as on the mat.

Indeed, his proficiency on his feet is illustrated by his martial arts record – five of his wins have come via KO or TKO, and he has more finishes via strikes than via submissions.

That stat has led some to ask why he hasn’t utilised his elite-level grappling more frequently in the cage, and the Brazilian suggested we may see a little more of his grappling against Bigdash in Jakarta.

“Everyone asks me, ‘Why don’t you show your jiu-jitsu in ONE?’” he said.

“So okay, I will do my best to show my background. That is the plan. It could be a submission, or it could be anything.”

With powerful strikes, a penchant for the spectacular and a top-of-the-food-chain ground game, Ataides is ready to win wherever the bout goes.

With a skillset like that, his matchup with Bigdash could deliver one of the bouts of the year so far.