At least 10 on Japan cruise ship test positive for coronavirus

A small boat is pictured next to the Diamond Princess cruise ship with over 3,000 people as it sits anchored in quarantine off the port of Yokohama, on Feb 4, 2020, a day after it arrived with passengers feeling ill.

TOKYO - At least 10 passengers on a cruise ship that Japan quarantined tested positive for the new coronavirus, the Japanese health minister said on Wednesday (Feb 5).

The 10 confirmed cases were among 31 results from 273 people tested so far, Health Minister Katsunobu Kato told a news conference on Wednesday morning.

“From around 7.30 am (2230 GMT Tuesday), we had them (the 10 who tested positive) get off the vessel, and with cooperation with the coastguard we are sending them to medical organisations,” he said.

Japan has quarantined the vessel carrying 3,711 people and was testing those onboard for the virus after a former passenger was diagnosed with the illness in Hong Kong.

Health officials were testing people who had shown symptoms such as fevers or those who had been in close contact with such people, public broadcaster NHK reported.

A health ministry official said not everyone would be tested with PCR (polymerase chain reaction) kits because it was too time-consuming and deemed unnecessary.

The health checks began on Monday evening after an 80-year-old Hong Kong man who sailed on the vessel last month tested positive for the Wuhan coronavirus.

Photographs and video posted on Twitter by a passenger with the handle @daxa–tw showed masked health workers clad in blue plastic gowns walking down empty corridors on the Diamond Princess as well as views of deserted lounges and a barren deck. 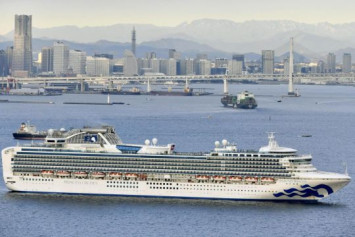 Carnival Japan, the local unit of the British-American cruise operator, said on Tuesday the turnaround of the ship had been delayed by about 24 hours.

It was not immediately available for comment on Wednesday.

Carnival’s Princess Cruises Japan said on Tuesday that cruises scheduled to depart from Yokohama and the western Japanese port of Kobe this week would be cancelled because of delays related to the coronavirus checks.

The new cases bring the total number of confirmed cases to 33 in Japan.

Besides Japan, more than 20 countries have confirmed cases of the virus, which has killed nearly 500 people and infected more than 24,000 in mainland China.

The outbreak has prompted the World Health Organisation (WHO) to declare a global health emergency, several governments to institute travel restrictions, and airlines to suspend flights to and from China.