A model of a proposed Ram temple that Hindu groups want to build at a disputed religious site in Ayodhya in the northern state of Uttar Pradesh, India.

AYODHYA, India - A thumping election win for India's Hindu nationalist party on Thursday has instilled a sense of resignation among Muslims, some of whom are now willing to concede the demand for a Hindu temple at the site of a razed mosque.

Prime Minister Narendra Modi's Bharatiya Janata Party (BJP) is set to win a bigger majority than in 2014, Election Commission data showed, cheering its conservative base that is expected to double down on demands of the majority Hindu community.

Many Hindus believe a mosque razed in 1992 in the northern town of Ayodhya was built in the same place where Lord Ram, a physical incarnation of the Hindu god Vishnu, was born. They also point to evidence there was a temple there before the mosque was built in 1528.

The destruction of the mosque by a Hindu mob had led to riots that killed about 2,000 people across the country.

"We congratulate the prime minister and urge him to ensure that Muslims don't get to suffer any longer," said Haji Mahboob Ahmad, a 65-year-old Muslim community leader who lives near the site of the 16th century mosque.

"There's no denying that there's a sense of resignation among millions of Muslims who fear further alienation. For us, the issue of temple is like the sword Damocles. Let the temple come up. We need to get over it."

Ahmad, a litigant in a case seeking to preserve the Muslim claim to the site where the mosque once stood, said Muslims in Ayodhya would not oppose the temple in a bid to keep the peace. 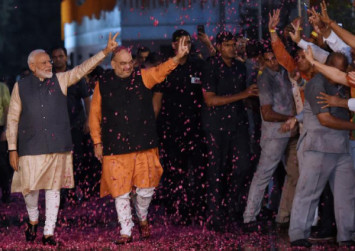 "Since the prime minister has been re-elected with a bigger mandate, he's well-placed to solve the issue that has only deepened the divide between Hindus and Muslims," said Ashraf Jalal, the imam, or main priest, of Ayodhya.

"For the sake of peace and development, we've decided to support the idea of the temple."

Late last year, dozens of Hindu monks and tens of thousands of followers, gathered under the banner of groups affiliated to the BJP, assembled in Ayodhya and New Delhi to push Modi to build the temple.

Hindu groups told Reuters this week they would press Modi on their demand for a Ram temple on the Ayodhya site, life in jail for killing cows - considered sacred by many Hindus - and ending the autonomy of India's only Muslim-majority state.

Currently a court-appointed panel is arbitrating the temple dispute. The panel is likely to give its views to the court by Aug 15, when its term ends.

"We hope that the verdict of the panel will put the issue to rest," another Muslim man, Azam Qadir, said. "We've no problem with the construction of the temple. We want peace and progress and the dispute has time and again come in the way of development."

The BJP said in its election manifesto that it would "explore all possibilities within the framework of the constitution and all necessary efforts to facilitate the expeditious construction of the Ram temple in Ayodhya".

In the western town of Nagpur, the base for BJP parent Rashtriya Swayamsevak Sangh, many Muslims echoed the sentiments expressed by Ayodhya's Muslims.

"I don't have any problem with the BJP getting re-elected but the party must peacefully solve the issue of the Ram temple," said Wasim Shaikh, a young taxi driver in Nagpur.

But Zafaryab Jilani, a secretary of the All-India Muslim Personal Law Board and a lawyer in the legal case over the site, said he would only go by the verdict of the Supreme Court.

"There's no question of surrendering our claim over the site," he said.

Many Muslims are also spooked by the win of a Hindu ascetic accused of plotting a bomb attack on Muslims. BJP's Pragya Thakur, the first person accused of terrorism to be fielded by a major political group in India, has boasted of her role in demolishing the mosque in Ayodhya.

She has denied any links to the attack on Muslims.