JAKARTA - Divers deployed for search and rescue operations following the crash of Lion Air flight JT610 on Monday (Oct 29) morning in waters off Karawang, West Java, have recovered the belongings of some passengers but they have yet to find any survivors.

Several identity cards, bank books, driving licences have been found, but there is still no sign of the black box from the aircraft, said Brigadier General (BG) Nugroho Budi Wiryanto, who is deputy head for operations at Indonesia's national search and rescue agency Basarnas.

When asked if divers have found any survivors or bodies, he would say only that there were some signs of remains such as limbs, but he reiterated that the search is still ongoing.

"No bodies have been found yet," he added. "We are waiting for miracles from God."

Basarnas chief Muhammad Syaugi said his agency was alerted to the incident at about 6.50am and immediately dispatched resources to the possible crash site.

"When we arrived at the location, we found aircraft debris, a buoy, mobile phones, and several objects," said Air Marshal Syaugi at a joint press conference on Monday morning with Indonesia's national transportation safety committee KNKT.

Some reports said plane parts including aircraft seats were among the debris retrieved off the waters.

Indonesia's President Joko Widodo said the authorities would do their best to find and rescue the victims of Monday's air crash.

"I will continue to pray that victims can be found immediately. I'm deeply concerned for the families of the victims, but we hope the victims' families will stay calm while waiting for the SAR (search and rescue) teams which are currently working hard at the scene. I also ordered the KNKT (national transportation safety committee) to immediately investigate this incident and submit the results of the investigation as quickly as possible," said Mr Joko.

The Boeing 737 MAX aircraft was carrying 189 people when it lost contact with air traffic controllers shortly after take-off on Monday morning.

BG Nugroho was speaking at a press conference after flight JT610 lost contact with air traffic controllers 13 minutes after take-off from Soekarno-Hatta airport at 6.20am, and crashed into waters off Karawang.

He said that more than 300 personnel from Basarnas, the Indonesian military (TNI) and police have been mobilised for the search and rescue operations, which will be carried out for seven days, and extended by three days if needed.

A command post for the operations has also been set up at Pier 2 in Tanjung Priok port which is near the crash site.

Indonesia's national transportation safety committee KNKT has said that underwater locators will be sent to the site of the crash to assist divers in locating the sunken aircraft and the blackbox.

Indonesia's Finance Minister, Dr Sri Mulyani Indrawati was also at Basarnas on Monday for a briefing on rescue operations.

Of the 189 on board the aircraft were 20 staff members from her ministry and other government agencies, who were in Jakarta at the weekend for a commemorative event, she added.

"We have received an explanation from Basarnas chief regarding the process of locating the plane, and the location where it likely to have crashed," she told reporters. "I'm very concerned about the passengers." 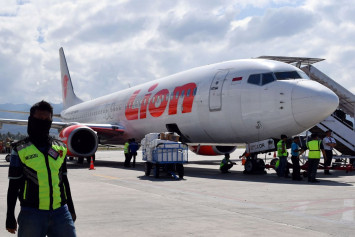 Separately, Lion Air chief executive Edward Sirait said he is still waiting for updates on status of the 189 passengers. He also confirmed that according to the pilot's records, the plane was in a condition to fly.

"There was a technical problem reported after the previous flight the night before from Denpasar to Jakarta, and the problem was dealt with and the plane was subsequently released to fly by a certified engineer," he added.

Mr Sirait also said Lion Air stood by its pilots and was sure they operated according to required procedures.

"The weather was also good, everything was clear before the incident," he added.

On a request by the pilot to return to base shortly after take-off, Mr Sirait would only say that Lion Air is still trying to verify the information.