All 189 passengers on board Lion Air flight JT610 are feared dead after the plane crash 13 minutes after take-off from Jakarta. The plane was bound for Pangkal Pinang.

It was Indonesia's worst aviation disaster since a Garuda Indonesia plane crashed in Medan in 1997, killing all 214 people on board.

The size of the debris collected so far showed the ill-fated Lion Air dived into the water at high speed and the plane broke in pieces upon impact with the water body, Mr Soerjanto Tjahjono, chief of Indonesia's National Transportation Safety Committee (KNKT), told a radio station.

His comments on Monday (Nov 5) effectively ruled out earlier predictions by some quarters that the plane might have broken apart in mid-air.

"Lion Air crash is more devastating than Air Asia's. Lion Air crash produced smaller debris size. Lion Air fell hard into the sea at high speed, while Air Asia (plane) stalled and glided into the sea," he said, referring to AirAsia flight QZ8501 which crashed into Java Sea off Borneo 40 minutes after take-off from Surabaya. There were 162 people on board the Singapore-bound flight.

"At impact, in the Lion Air case, the engine was running at high speed."

Some experts have said the Boeing 737 Max 8 plane nosed downward so abruptly that it may have hit speeds of 1,000kmh or more before slamming into the sea last Monday.

The search team have recovered a flight data recorder, both the engines, a part of the landing gear, body parts of victims and personal belongings in a week-long search which was extended for three more days on Sunday.

In comments that highlighted the challenges ahead as divers continued on Monday (Nov 5) to search for the main wreckage and cockpit voice recorder, Mr Soerjanto said the chances of finding Lion Air plane's fuselage in one good piece are not high as even its strongest body part was torn apart in the crash.

The KNKT chief said last week that a preliminary report of the investigations into one of the country's worst aviation disasters will be released in about a month while a complete study may take up to six months. 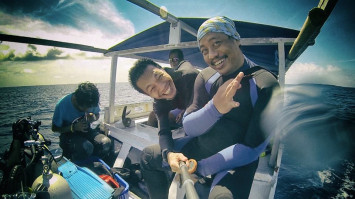 So far 138 body bags containing human remains have been recovered. Fourteen victims have been identified by DNA tests and their personal belongings.

The Indonesian Transport Ministry said in a statement the authorities are also conducting a "special audit" of the standard operating procedures of the budget airline, the flight crew qualifications and coordination with industry stakeholders.

The government had already ordered a review of Lion Air's repair and maintenance unit and suspended several managers as it emerged the ill-fated jet had reported some technical issues on a flight from Bali to Jakarta a day before last Monday's (Oct 29) the crash.