There's a reason why dogs are considered man's best friend; beyond their cute demeanour and unfailing ability to brighten up our day, dogs provide their family members with unconditional love and loyalty till their very last breath.

That definitely rings true for Leo, a dog in Thailand that waited for his owner along the very street he was left behind on for a long time.

The canine's story was recently shared online by a Thai netizen. The netizen spotted Leo hanging around the road, acting as though he was abandoned, before a woman came by to feed him, reported China Press.

After asking around, they found out Leo had actually been waiting along the same street for four years now.

According to the feeder, Pinnuchawet, she had tried bringing Leo home as he had been rather skinny and was suffering from leprosy. However, Leo escaped from her house days later and returned to the road where he was first found.

The dog was not willing to follow Pinnuchawet home, so she had no choice but to bring the food to him. On days where she was too busy to go, her family would feed Leo in her place.

Kindhearted netizens helped to share Leo's story on social media in hopes of reuniting him with his owners.

Leo's lucky stars shined down on him when a family contacted the original poster saying Leo looked like BonBon, a dog they had lost four years ago.

The first owner, Noi, explained that they had brought their dog along to visit their relatives. When they stopped at a gas station, they realised BonBon was no longer in the car.

Noi suspected that BonBon might have jumped out upon seeing something interesting, but even after turning back to comb through the roads, they were unable to find him. 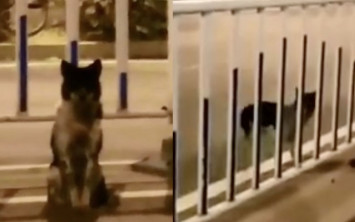 Having believed BonBon had died, the family was extremely happy to find out that he was alive and well after so many years. They came by on Sept 9 to bring BonBon home.

Even though BonBon wagged his tail in excitement when they were finally reunited, he was unwilling to follow Noi home.

After having a discussion, Noi and Pinnuchawet decided it would be better for the latter to care for him while Noi dropped by every now and then to help.

The two plan to bring BonBon to the vet for a checkup on Sept 14 before taking him to his new forever home.

#Dogs #lost #Found #Thailand #Pets #In Case You Missed It