The Malaysian government deported the Myanmar nationals last month, just hours after an interim court order banning their departure ahead of a legal hearing on a bid by Amnesty International and Asylum Access to halt the plan.

The ruling by the Kuala Lumpur High Court on Tuesday came despite a Malaysian law that prevents anyone from challenging a decision made by immigration authorities.

The ruling will also pave the way for a full hearing on the deportations and extends a stay barring the removal of another 114 Myanmar nationals until the end of the judicial review. Malaysia had initially said it would deport 1,200 people.

"It’s a very important decision because it recognises the function of non-government organisations like Asylum Access and Amnesty International and their standing in bringing judicial review to hold the authorities accountable," Mr New Sin Yew, the lawyer for the human rights groups, told Reuters.

The groups’ legal bid is unlikely to bring those who have already been deported, but could allow similar challenges against future removals, Mr New added. 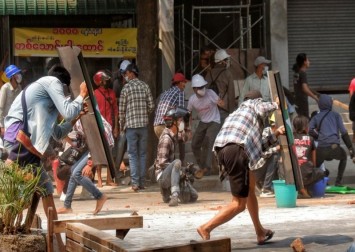 The immigration department did not immediately respond to a request for comment on the court ruling.

The rights groups had taken court action amid fears that the group to be sent back could include asylum-seekers or refugees fleeing persecution in Myanmar, where the military seized power last month.

Malaysia’s immigration department had said those repatriated did not include Rohingya refugees or asylum-seekers.

But concerns have persisted, as the UN refugee agency has not been allowed to interview immigration detainees for more than a year to verify their status.

The rights groups in their court filing had said three UN-registered people and 17 minors with at least one parent in Malaysia were on the deportee list.

It was unclear if those were sent back.