A woman wearing a mask to prevent the coronavirus uses her mobile phone at a shopping district in Seoul, South Korea, on Feb 24, 2020.

SEOUL - As the new coronavirus spreads in South Korea, private software developers have set up websites and apps to help people track cases and shun places where infected people have been in the hope of avoiding the fast-spreading virus.

The government, stung by criticism of how it handled past outbreaks, initially released very detailed information on confirmed cases, including the age, gender and daily routes infected people took before being quarantined.

Identities were not published but the information enabled Web developers to build detailed maps tracking the movements of patients.

"We experienced a public backlash after a mass infection took place during the MERS outbreak five years ago because we didn't make public where those patients had gone," a health official, who declined to be identified because of the sensitivity of the matter, told Reuters.

A button on one of the sites, Coronamap.live, is labelled "See whether I am safe". A click shows users if there are any known coronavirus cases in their vicinity.

Many South Koreans have been logging onto the sites, with some saying the thought of becoming infected and appearing on an online map is so mortifying it keeps them from going out.

Seo Su-sung, a 21-year-old student who finds Coronamap.live the most useful, said the more information, the better for everyone.

"It keeps society at ease to avoid the contaminated areas when you can," Seo said.

"Otherwise I could not only harm myself, but also others around me."

Mr Ryan Jun-seo Hong, 19, a computer science major who set up the Coronamap.live site while waiting for his mandatory military service to begin, said more than 300,000 people have been viewing the site every day.

But the increase in cases over recent days with confirmed infections surging from 31 to more than 763, including seven deaths, in less than a week, has made it nearly impossible to keep up. 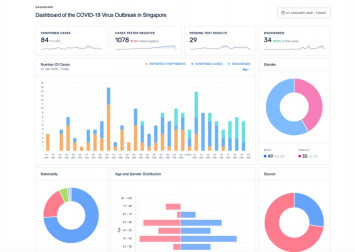 "Currently adding 600+ places," said a message on Monday on Coronamap.live, which offers an interactive map in Korean, Chinese and English.

The health authorities also just can't keep up with the new cases and in recent days have been forced to publish more general summaries and regional information on cases.

Still, the government regularly releases updates and discusses cases in briefings, and Mr Hong said he uses a wide range of other open-source resources like news reports to supplement official data.

"I gather all kinds of information for updates, and I include personal feedback from users," Mr Hong said.

Another developer, Mr Kwon Young-jae, runs a similar site with his wife, Ms Ju Yeun-jin, who is also a software developer, but they've been overwhelmed by the surge in cases.

Their Wuhanvirus.kr shows a real-time tally of the infections, deaths and discharged patients from both South Korea and the world.

But Mr Kwon said the soaring numbers meant he and his wife were hardly getting any sleep.

"It was easy to update the page up until the beginning of last week," he said.

"But with tens of new patients every few hours, it's starting to take a toll on us."