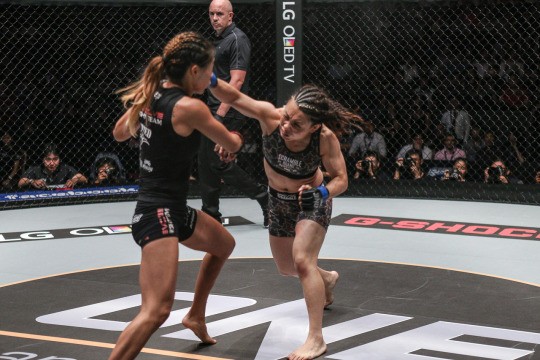 Mei “V.V.” Yamaguchi (17-10-1) returns to the big stage with world championship gold in her sights once again.

On Friday, 18 May, Yamaguchi takes on former foe, “Unstoppable” Angela Lee, to challenge for the ONE Women’s Atomweight World Championship in a hotly-anticipated rematch at ONE: UNSTOPPABLE DREAMS in Singapore.

Their first bout in May 2016 was a “Fight of the Year” candidate, as the pair went back and forth for five all-action rounds, with Lee running out the decision victor to capture the inaugural atomweight world title.

Two years have passed since Yamaguchi and Lee last shared the cage together, and the Japanese challenger says she’s a completely different martial artist to the one that lost a decision to “Unstoppable” in that first match.

“I have a lot of confidence now,” she explained.

“I do not know how much, but it is pretty obvious that I am really confident in both the ground game and boxing.

“I have always had good coaches and good people around me, as I have fought for the last 10 years, but there were still positions, or situations, that I would worry about. Now I am becoming more perfect in every position.

“I have fewer things that I am worried about, and I think that has given me a lot of confidence.”

Yamaguchi heads into the contest with two impressive wins under her belt. She finished Jenny “Lady GoGo” Huang via submission last June, then dominated Gina “Conviction” Iniong over three rounds in November.

Now, Yamaguchi is ready to face Lee for a second time, and even though she knows she’ll be doing so in Lee’s adopted home of Singapore, she says she’s prepared for the challenge ahead.

“Basically, if I am fighting in a foreign country, most of the time, the crowd will support the opponent,” she said.

“I know that, and I know how to prepare for that, so it does not matter that much. It is not a big deal for me. I just need to shut that out, and do what I need to do.”

“I am pretty excited because now a lot of people know about ONE Championship,” she explained.

“We have this TV program in Japan (AbemaTV) and you can see it on your cell phone — I think more people watch that than a normal TV program because it is so easy to watch.

“They are showing ONE Championship on that program now, so I am pretty excited that more Japanese people get to see ONE Championship. If they come to Japan, it is only going to get bigger and bigger, and if I can fight at that card, my fans and my supporters will be excited about that, too.”

With the popularity of ONE Championship growing in her home nation, and with Yamaguchi set to compete in one of the biggest shows in ONE history in Singapore on 18 May, things are looking up for the 35-year-old.

The growth of the sport isn’t lost on Yamaguchi, who remembers a time when women weren’t afforded the same competitive opportunities in martial arts as their male counterparts.

“When mixed martial arts first got big in Japan, a lot of people watched it, but there were no women’s matches,” she explained.

“I know that women’s mixed martial arts got big in Japan first — and now there are a lot of women’s athletes now in the United States and all over the world — but it was a really hard time for Japanese mixed martial artists to keep competing.

“We did not have any fights, or [any big] promotions, so it was really, really hard. Because I love mixed martial arts, I always kept doing it, and I was hoping and dreaming for a day when women’s mixed martial arts would get big all over the world.

“Now, it is happening. I never gave up, and now I have this chance, and I want other people to see that.”

Driven by her sheer determination and desire to succeed, Yamaguchi has positioned herself for a second shot at the ONE Atomweight World Title.

And if she’s victorious, she’d love nothing more than to return home to Japan to defend her title on home soil.

“That is perfect! I think all my supporters would like to see that!”