South Korea's president-elect Yoon Suk-yeol speaks during a news conference to address his relocation plans of the presidential office, at his transition team office in Seoul, South Korea on March 20, 2022.

SEOUL - Outgoing South Korean President Moon Jae-in’s administration said on Monday (March 21) his successor’s rush to relocate the presidential office and official residence could “create a security vacuum and confusion” at a time of tensions with North Korea.

South Korean president-elect Yoon Suk-yeol, breaking with tradition, announced on Sunday he will move the presidential office from the Blue House to the defence ministry compound, a step estimated to cost US$40 million (S$54 million). Yoon said he wants to make the move immediately after his inauguration on May 10.

Moon’s press secretary Park Soo-hyun said it is “unfeasible” to relocate the defence ministry, the Joint Chiefs of Staff, the offices of the president and secretaries and the security service within the short period before Yoon takes office.

“The security crisis on the Korean peninsula is escalating, and a sudden and unprepared relocation... could create a security vacuum and confusion,” Park said at a briefing.

Yoon’s People Power Party accused the Moon administration of shifting its position after initially saying it hoped Yoon would implement the promise, which mirrored one Moon had made before abandoning the plan for security and logistical reasons.

“The president-elect had already reviewed potential security issues that the Blue House raised, and explained to the people himself,” the party said in a statement responding to Park’s comments, urging Moon’s office to help allocate a budget and cooperate on the plan. 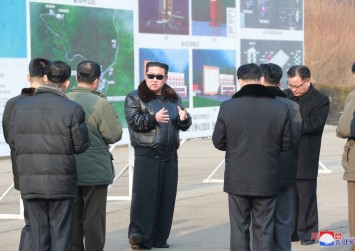 Park said the move would be more reasonable if it was not rushed. Moon’s administration would share its concerns with Yoon’s transition team and make its official position after more consultations, he added.

Yoon’s team has said the Blue House is a symbol of South Korea’s “imperial presidency” and a move would improve public access and communications with aides. They have denied critics’ suggestion that Yoon was influenced by concerns that the Blue House is in an “inauspicious” location.

A petition uploaded to the presidential office’s website on Thursday opposing Yoon’s plan to move had gathered more than 340,000 signatures as of Monday.

Conservative Yoon is expected to take a harder line against North Korea than Moon, a member of the liberal Democratic Party who made engaging Pyongyang a major part of his agenda. South Korean presidents serve for a single five-year term.

Tensions have been rising after North Korea began the year with an unprecedented flurry of missile tests. It appears to be preparing to launch a spy satellite, and leader Kim Jong Un has suggested it could resume testing intercontinental ballistic missiles (ICBMs) or nuclear weapons for the first time since 2017.